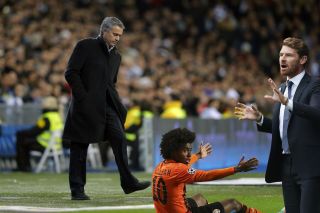 José Mourinho has defended his controversial decision to kick new £32m signing Willian Borges da Silva to death in the presence of Andre Villas-Boas, days after snatching him from under the Tottenham manager’s nose.

Willian looked set to join the North London club as part replacement for the departing Gareth Bale, but Chelsea swooped at the last moment to hijack the transfer and kick the player to death, in a move that is likely to be considered highly provocative.

“This has nothing to do with Spurs or with Villas-Boas,” Mourinho explained to journalists, as an aide carefully wiped the Brazilian’s blood off the Chelsea manager’s steel-capped moccasins. “We identified Willian long ago as a player we wanted to kick to death this season, so, we kick him to death.

A visibly shocked Villas-Boas attempted to intervene, but was unable prevent Mourinho from raining blow after blow on the prone figure of the 25-year old, while shouting “are you watching, André? Are you watching?” The ex-Anzhi player’s corpse is expected to be kept in cold storage by Chelsea officials, to be removed and displayed when the Blues visit White Hart Lane on September 28.

When asked by journalists whether he couldn’t have kicked André Schürrle or Victor Moses to death instead, Mourinho reacted irritably, insisting that kicking any of his other players to death was not part of the plan.

“If Mr Abramovich wants to kick someone to death, of course, he can do that,” Mourinho said, before appearing to mouth the words ‘Ray Wilkins’. “But I think our kicking-to-death business is finished for this window.

“Mind you, things can change quickly in football. Ask me next week about Erik Lamela.”