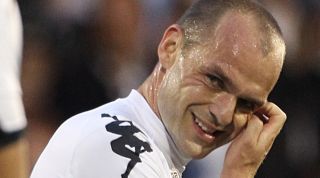 Danny, you've been retired for a month or so now, how are you finding it? Missing the footballer's life?
I thought I would miss it but I've been really busy with media commitments and my coaching badges. In some ways it's nice as you don't have that continual routine, but it's a lot quieter too. The training ground banter is something I'll miss in time, but it was the right moment to move onto a new chapter in my life.

Have you had any contact regarding coaching opportunities?
No, not yet. I'm still in the process of taking the qualifications. I'm really focused on getting my badges right now because coaching is what I see as the next step in my career. I'm not naive enough to think I can just walk into a position and I realise I've still got a lot to learn. It's something I'm excited about and keen to get more involvement with in the future.

Two of your former clubs go head-to-head on Saturday when Liverpool host Fulham. Do you expect the Reds to bounce back from their defeat against Arsenal?
Yes, I do. Liverpool have had a great start to the season and I don't think supporters should be too down about that defeat. Arsenal played very well and a trip to the Emirates is always a difficult proposition for any side.

It was a rare occasion where the front two of Suarez and Sturridge didn't have much joy, but I don't think that will be the case very often this season. They make things happen and Liverpool go into most matches knowing they carry a serious goal threat. They'll have too much for Fulham in attack. They've also got Philippe Coutinho back from injury now and I think he is a big player for them.

What is it about Coutinho that makes Liverpool a better team?
Well, they've done pretty well without him recently, but there's no doubt he'll improve them. He's such an intelligent player. He links the play and adds another dimension to the team in terms of creativity. With Suarez and Sturridge up front he can play from the left but if they continue with the three at the back, I'd expect him to revel in a free role just behind the strikers. He racked up a lot of assists in the second half of last season and scored a few too. He's a real talent and I think his return is a massive boost for Liverpool and their bid to maintain this good start.

What has impressed you most about Liverpool this season?
Obviously, the front two have been exceptional. They are as good as anything in Europe at the moment and that always gives you a chance. The team is also adaptable and look comfortable switching between different formations and tactics.

They lost at Arsenal but have built up good momentum. If you look at the second half of last season and the opening 10 games of this season, Liverpool have been pretty consistent. The players are responding to what the manager is asking of them and I've been impressed with the way he has gone about things at Anfield. Okay, they had the blip at home against Southampton, but that is going to happen now and then.

They've already beaten Manchester United on home turf and I'd fancy them to beat any of the big teams at Anfield. If you'd told the players or coaching staff at Melwood they'd be in this position after 10 games during the summer, they'd have been delighted.

What do they lack or need to improve to push on?
I'm a little bit concerned about the central midfield area. They've got Gerrard and Lucas in there and Joe Allen is on the bench, but I think they need someone else. It's an area I'd expect Rodgers to try and address in January.

Stevie can't go on forever and that's a big void they are going to have to fill so planning for the future is going to be important. They need someone with a bit of power, someone with presence. I'm not sure who that would be but there are some top players out there who would relish the chance to come to Liverpool, particularly as they look to be going places under Rodgers.

Speaking to fans and some of the players, you get the feeling that everyone is excited about the future and they are all pulling in the same direction. They are also benefitting from less expectation. For as long as I can remember people have been saying Liverpool should be challenging for titles and sometimes that is not realistic. If they can make the right additions in the window it could be a very successful season.

One midfielder who has continually been linked with a return to Anfield is Xabi Alonso. He's out of contract next summer - is a return for him something you'd be in favour of? He's not quite the power and presence in midfield you mentioned...
Xabi is a different type of player. He is so strong in possession and dictates the play. He can control the tempo of matches and is a top footballer. In many ways, he's quite unique when you look at what a modern central midfielder can offer. So, in answer to your question, yes I'd love to see him back at Anfield.

By all accounts he's a top guy who enjoyed his time at Liverpool. He'd be a great re-signing for the club. Whether he is a realistic target or fits in with the type of player Liverpool are looking at remains to be seen. Even if it was a short-term addition, I think he would improve this Liverpool team.

Realistically how far can Liverpool go this season? What is your gut feeling about their top four hopes?
My gut feeling is that they will finish in the top four. Again, that view is based upon how good the front two are. It's a tight league this season and there are quite a few clubs pushing for a top four place. But I've just got a good vibe about Liverpool. I think they will kick on and continue to improve as a side. They haven't got Europe to contend with like some of their rivals and if they bolster the squad in January I'm confident they can kick on and get back into the Champions League.

Looking at Fulham, do you fear for them given the start they've had?
No, I don't think they need to worry about being relegated. When you look at teams down the bottom you associate them with a lack of goals. I think with the likes of Darren Bent and Dimitar Berbatov at the club they've got enough of a goal threat. They've had a difficult start and confidence is not as high as it could be. They've conceded some poor goals from their point of view and that hasn't helped.

If they can tighten up and make themselves harder to beat I think results will improve. The depth of the squad isn't as strong as it was a couple of years ago and hopefully the new owner can help Martin (Jol) address that in the near future.

Martin Jol has been under a bit of pressure as a result of their slow start. Is he the man to steady the ship?
I think Martin is a good coach. He's a good guy, he loves the club and I think he'll be doing all he can along with Billy (McKinlay) to make it right. It's still early days in the season. People get a bit carried away from week to week.

They've brought in Scott Parker and Bent who are two players that know the Premier League and will have a positive impact. I expect Berbatov to improve after a slow start. Then if you look at the likes of Damien Duff and Brede Hangeland, they've got enough experience to respond.

It's not a time for clubs to panic and sack managers after 10 games in my opinion. Martin will sort it out.