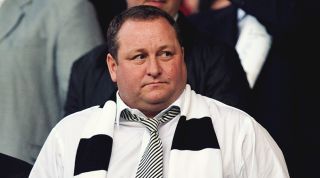 When Sports Direct tycoon Mike Ashley bought Newcastle United 13 years ago, fans initially rejoiced. He promised to bring the glory days back to Tyneside, drank with the fans and appointed club legend Kevin Keegan as manager. Joy seemed to be on the cards for the Magpies.

Oh, how things have changed in the intervening years. Newcastle have come to expect the ridiculous – from Alan Pardew blaming a lack of signings on Notting Hill Carnival, to fans speculating over WWE chief Vince McMahon buying the club – but nothing could have prepared the club for the lows they’ve faced under Ashley.

Newcastle’s ownership could well change hands any day soon, with the long-rumoured takeover back on. Mike Ashley’s exit would signal the end of one of the most disastrous ownerships in English football.

St. James’s Park has been the home of Newcastle ever since the club formed in 1892, so understandably, it didn’t go down well when Mike Ashley renamed it The Sports Direct Arena in honour of his company.

This was just one of a number of deals that Ashley worked with Sports Direct; it was at one point claimed that the sportswear giant’s omnipresence at the ground was because Ashley allocated to it any advertising space that wasn’t sold.

The stadium was again renamed in 2011, with controversial payday loan company Wonga purchasing the naming rights the following season. That wasn't even the end of it: the club has also been fined for allowing betting company Fun88 to sponsor children’s shirts. All in all, some poor decisions from Ashley on sponsorship.

Kevin Keegan is one of the most iconic figures in Toon history. When the legend was appointed manager, it signalled a new dawn for the club, but not one that fans would have hoped for.

Keegan complained of both Ashley and Director of Football Dennis Wise undermining him. King Kev left, later winning £2 million in damages from the Newcastle owner over his treatment while at the club.

Fans dubbed Wise and Ashley “the cockney mafia”: it was the worst possible start to life as the club owner, with the club officially admitting to the arbitration panel that they deliberately misled the fans along the way.

Alan Pardew’s run as Newcastle manager was a strange one, marred by headbutting David Meyler, calling Manuel Pellegrini an “old c***” live on TV and a dreadful record against rivals Sunderland.

Amazingly, his original Newcastle United contract would be due to run out later this year.

Pards may well have captured the lightning form of a number of French exports, but Ashley’s decision to award the manager with a bumper new deal seemed naive, even at the time. What followed was arguably just as regrettable – Pardew was allowed to leave without any kind of replacement lined up, leading to John Carver taking over.

Carver told the press he was “the best coach in the league”, but had his contract terminated after only just keeping the Magpies in the Premier League on the final day of the season.

• Name every man who's played AND managed in the Premier League

Joe Kinnear (parts one and two)

According to Shay Given’s autobiography, the appointment of Joe Kinnear as Newcastle manager in 2008 was met with overwhelming disappointment from the players. Kinnear had been out of work for five years and arguably last successful at Wimbledon in the late ‘90s – sure enough, success didn’t follow at Tyneside.

After verbally abusing the media, calling Charles N’Zogbia “Charles Insomnia” in a post-match interview – the Frenchman demanded to leave the club due to this particular incident – and guiding the club to just above the relegation zone, Kinnear was relieved of duties, only to return again later in 2013 as Director of Football. This time he labelled Yohan Cabaye “Yohan Kebab”, but didn’t make a permanent signing for the Magpies.

It’s hard enough to find a manager who wants to work for Mike Ashley. To find a former Champions League and Europa League winner, who voluntarily stays with the club after a relegation – surely Ashley would do everything in his power to keep this one?

Apparently not. Rafa Benitez was adored in the north east; an icon of the Premier League and a man that was working miracles given the state of his squad – but that didn’t stop Ashley from releasing an official statement of Rafa’s contract ending without extension.

Newcastle chief executive, Lee Charnley, wrote in the official programme about how the Spaniard’s decision to desert the Magpies for the Chinese Super League was all about money. “If I was only interested in moving ‘for money’, as Charnley stated, I could have done it much earlier,” Rafa replied.

When Newcastle were relegated under Alan Shearer – an inexperienced manager who was still learning on the job, admittedly – Ashley apparently told the Toon legend that he’d still be entrusted with the role of taking the Magpies back up. That was, according to reports, the last time the pair spoke.

Shearer is now a vocal critic of the owner of the club he scored 148 league goals for. Meanwhile, the Alan Shearer Bar at St. James’s Park has since been renamed and Ashley has apparently refused the Newcastle legend a statue on the stadium’s premises.

Considering that Brighton are actually in a similar position points-wise to where they were last season, Chris Hughton can count himself somewhat unlucky that he was sacked from the club last season. That’s nothing compared when he was Newcastle boss, however.

Hughton managed to get the Magpies promoted at the first time of asking, after becoming caretaker of the club when Newcastle failed to secure hiring Shearer. He won the Manager of the Month awards for August, September and then again in November – in fact, Hughton had the best league start of any Newcastle manager ever.

That didn’t prevent Hughton becoming the first managerial casualty of the following season. The fans were livid: the likes of Shearer and Alan Sugar spoke out over the injustice of the decision, with veteran defender Sol Campbell saying the sacking “makes no sense.”

On the final day of the 2014-15 season, Jonas Gutierrez scored the second goal to ensure Newcastle stayed in the Premier League in a 2–0 win at home to West Ham United. It was an emotional moment, as Gutierrez had fought cancer and undergone chemotherapy.

Gutierrez found out that he was being released by the club, however, from a phone call he overheard John Carver having. The Argentinian won a disability discrimination lawsuit against Newcastle in 2016, as by not being selected for the team due to his diagnosis meant that he couldn’t qualify for an appearances-related bonus. Other charges of unfavourable treatment and harassment were dropped.

Gutierrez’s mother spoke at the tribunal to say that Newcastle’s role in the episode had made her consider suicide. The case remains one of the saddest and most unfair in recent English football memory, but Gutierrez remains loved by the Toon faithful.

Relegation (parts one and two)

Newcastle United have been relegated six times in their history. A third of those have come under Ashley.

The first was a shock to everyone. Newcastle were seen at the time as a club “too big” to get sucked into the drop – they’d been playing Champions League football less than a decade before – but the second was simply down to negligence. The club had managed to stay up on the final day of the season just 12 months prior; it’s not like the warning signs weren’t there.

The two relegations remain the most depressing moments of Newcastle’s on-field existence under Ashley. What compounds the gloom is that they were never close to that turmoil before he bought the club.

Mike Ashley vowed to sell Newcastle United the first time they were relegated. The asking price was set at £100m. In fact, he first indicated he was willing to sell back in 2008 after the fans revolted over the Kevin Keegan incident.

Sure enough, the club is still in Ashley’s hands. With a chronic lack of investment on the pitch, in the academy and at the training ground, Newcastle isn’t an attractive club to manage, let alone to own.