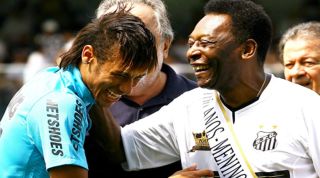 After months of rumours, Neymar has officially been unveiled as the new Pele, bringing the curtain down on Pele's 72-year hold on the position and leaving the former football legend surplus to requirements.

Four virtuoso seasons with Santos earned Neymar a £48.6m transfer to Barcelona, and his heroics at the Confederations Cup had left few in doubt that today's announcement was due.

Nonetheless, Neymar's ascent to the rank of Pele has been a rapid one. At the age of 24 he is the youngest player to become Pele since Pele himself.

"Effective immediately, Neymar is the new Pele," a spokesman from the Brazilian Football Confederation declared at today's ceremony.

"From this date onwards the only Pele is Neymar. The man once known as Pele is now merely Edson Arantes do Nascimento, or whatever he called himself."

As a slightly forlorn Pele [Edson Arantes do Nascimento] shook hands with a beaming Pele [Neymar] for the cameras, the spokesman explained that all the old Pele's goals, honours, his impotence awareness adverts and his cameo in Escape to Victory would now be credited to Neymar.

"This human shell that once housed Pele is now a mere husk," the spokesman concluded, jabbing at the former Pele's jacket. "Treat him like you would Abedi Pele or even Graziano Pelle."

As Edson Arantes do Nascimento attempted to make a speech of his own, his microphone was switched off and the spotlight turned to Pele [Neymar].

"Growing up near Sao Paulo I always dreamed of being Pele and now I am," Neymar told the gathered press corps as Edson Arantes do Nascimento was bundled out of a fire escape by security.

"Great times," Pele [Neymar] sighed drowning out Edson Arantes do Nascimento's pleas for someone to return his wallet to him.