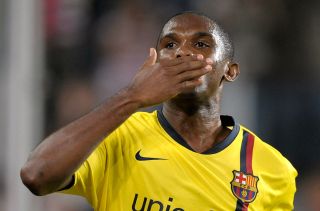 Goalkeeper
Iker Casillas
One of the best three goalkeepers in the world. A good person, too. I knew him at Real Madrid when he used to come to training on his moped and wear terrible tracksuits. Iker’s potential was clear, but lots of players have potential. Iker realised his.

Right-back
Daniel Alves
A player of the highest quality. He never panics. Alves has had success at Seville, but he’ll move to a bigger club. He’s very, very fast and while everyone knows he gets forward, he gets back just as quickly. Exceptionally skilful; he’s the new Cafu.

Centre-back
John Terry
He’s very English in his personality and a great leader of his team. He never gives in. Terry is strong and surprisingly quick. He also scores some important goals. I’ve met him at awards ceremonies and I like him.

Centre-back
Pepe
I’d play Pepe alongside Terry. Even I’d struggle to get past those two. He joined Madrid last year from Porto for £30m and was man of the match against Barcelona in Camp Nou in December.

Left-back
Patrice Evra
We speak the same language, but I don’t know him. Evra is a fabulous player, like Alves, because he’s quick and gets forward quickly. He’s improved a lot at Manchester.

Right-midfield
Steven Gerrard
More attacking than Diarra, he scores a lot for a midfielder. Gerrard is the heartbeat of the Liverpool team and he’s from Liverpool. Imagine being captain of your hometown team! Liverpool were very difficult to play against with Gerrard because he covers so much space.

Centre-midfield
Mahamadou Diarra
It was hard for anyone to replace Ivan Helguera in front of Madrid’s defence, but Diarra’s done it. He’s tireless and very, very strong, especially in the air. You need character as well as talent in this position and he has lots.

Left-midfield
Alessandro Del Piero
He’s a veteran, who has been a star for 15 years. To play at such a high level like him is incredible. Some players can play like this for two or three years. Del Piero has done it every year of his career. A legend of Italian football and a gentleman on and off the pitch.

Striker
Cristiano Ronaldo
Everyone wants to play like him and to his level. He has got better and better. Is there anyone better than him? Not at the moment. He scores more goals than the best strikers.

Striker
Didier Drogba
He’s won the African Footballer of the Year award like me. In his position, he’s one of the few players who holds the ball up and scores lots of goals. He has scored nearly one in two for his whole career. He is two types of striker in one.

Striker
Fredi Kanoute
The current African Footballer of the Year. Why did you let him leave England? He’s magnificent. Or maybe he wanted to leave so that he could win trophies. And he has won many trophies with Seville.

Manager
Luis Aragones
My grandad. I’ve got to have my grandad as manager. He put so much faith into me and I always tried to pay it back. Anyone who questions him knows nothing about football.

Emmanuel Adebayor
He’s a very creative player. I watch the English Premier League a lot on television and he has been Arsenal’s best player this season.

Abdul Keita
The Lyon winger is Ivorian like Didier Drogba. He is very versatile because he can play as a centre-forward or on either wing.

Didier Zokora
Another Ivorian. Understands the tactics of the game very well and is very hard. Every team needs a hard player.

Rio Ferdinand
Secure with the ball and very quick. Ferdinand and Vidic play well together. He passes the ball like a playmaker too.

Wayne Rooney
[Before naming his Perfect XI, Eto’o asked FFT: “Is Rooney’s first name Roy or Wayne?” We put him straight before he named young Roy, sorry Wayne, among his substitutes]. He’s not Manchester’s biggest star, but he has the most energy of their players. Like me, he attacks, but he defends too when his team lose possession. This is important. It’s not all about the glory of goals.

Raul
So many games and goals for Madrid, Raul has won everything more than once. He’s the icon of Real Madrid, the King of Madrid.