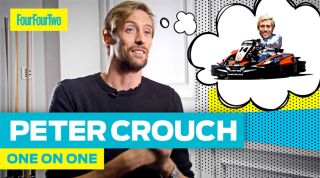 It’s a nightmare scenario for a player: your manager – Rafa Benitez in this case – is watching on as you’re about to drive right into your team-mates before the biggest game of the season. Not that Peter Crouch was at fault. When his brakes failed him during a team go-karting break in a training camp in 2007, he took the sensible decision and avoided the Spanish international.

“It was before the Champions League final,” Crouch tells FFT in a new video. “We were in Portugal, we had a week before the game and went to a go-karting track. We’re going around the track, I flew into the pits and thought: ‘Right, I’ll just brake now’ - no brakes whatsoever!

“I’ve seen [Xabi] Alonso and [Dirk] Kuyt and just thought: ‘Who’s the most valuable?’ So I swerved into Kuyt and, fair play to him, he’s literally jumped with his legs in the air and I’ve just gone straight under him.”

Crouch’s kart ended up an actual fiery wreck, but at least the the Stoke front man can laugh easily about it now. He’s also in excellent humour as he tells FourFourTwo about his chain-smoking former team-mate who’d have a puff at half-time, the biggest regret of his football career and what it was like training with a young Harry Kane.

Oh and he also revisits an old classic to tell us what he’d really be if he wasn’t a footballer. Click play on the below to check it out.