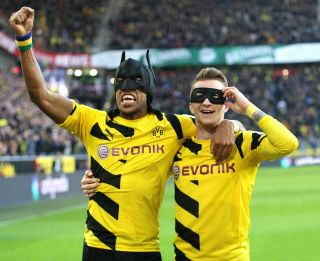 Pierre-Emerick, what did you know about Borussia Dortmund when you joined the club in 2013?

PEA: Everything. I knew everything. After all, this is a very popular club. I remember watching the team with [Czech striker] Jan Koller in the side.

At first you played on the wing, which seemed a natural role for you. How did you become the centre forward?

PEA: When I was young, I always played upfront. Then, when I turned professional, coaches liked to play me in midfield because of my pace. But I always thought of myself as a striker.

Marco, you're also very fast but have always been an offensive midfielder. Isn't it unusual to put the team's quickest player at centre forward?

MR: Actually, I think it makes perfect sense. Opposing defenders know how fast he is and so they make sure there are no long balls over the top of the defence. They instinctively drop back, which gives the other attacking players more space. I think it has always been his best position. He did well on the right wing, but over there he didn't have the freedom he needs for his game.

Bayern seem to be running away with the league title. What are your chances of winning silverware with Dortmund?

MR: At the moment, Bayern are ahead of us, that's a fact. It has to be our aim to close the gap, but this will take time. However, that doesn't mean you can't win titles here. Look at the club's history, look at how much silverware they have won.

PEA: I definitely think we can win titles with Borussia – and soon, maybe this year – because we have a great team. We have lost two cup finals in a row [against Bayern and Wolfsburg] and now we want that trophy. We also have a chance in the Europa League. That's why I don't want to leave the club now. I hope we can win something this year.

But there's one thing you can't achieve. You'll probably never play at the World Cup. So why did you choose to represent Gabon rather than France?

PEA: That's true, but I made the decision with my heart, not my head. Maybe it would have been easier to play for France. But going to the World Cup or winning the Ballon d'Or while playing for Gabon, that's a bigger motivation. I also made the choice because of my family. I talked it through with my parents and they felt it was the right decision.

But all that travelling must be a terrible strain.

MR: He's flying a lot, that's right. Sometimes he returns from a midweek international only on Friday. But what people who don't know Auba sometimes don't realise is how hard he's working for what he wants to achieve. All that work has now paid off with this African Footballer of the Year award.