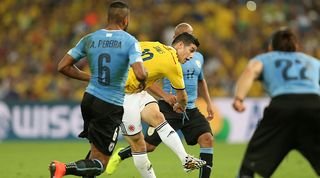 Pep Guardiola’s redeployment of Lahm in a midfield role at club level persuaded Joachim Low to follow suit with the national team. The plan didn’t really work, however, and the Germany captain was restored to his customary right-back role for the quarter-final triumph over France.

Suddenly, everything clicked for a team that had stuttered a little in meetings with Ghana, the United States and Algeria. Lahm was terrific from the last eight onwards, showcasing his fine blend of technical ability and tactical intelligence in his favoured position.

The 2014 World Cup’s standout centre-back helped the champions keep four clean sheets en route to the trophy. Hummel was on the bench for the last-16 victory over Algeria, but his displays before and after – namely, Germany’s last three games in Brazil; the quarter-final against France, the semi against the hosts and final against Argentina – were exceptional.

Hummels marshalled Die Mannschaft 's backline with characteristic assurance, and also popped up with a goal against Portugal and the winner against France. Low’s decision to restore the Borussia Dortmund stopper to his starting XI after the Algeria match was pivotal to his side’s eventual success.

Even when he was absent from the matchday squad, Neymar defined the 2014 hosts: the symbolic raising of the injured star’s shirt before the astonishing semi-final demolition by Germany hinted at the emotional fragility of a team that would soon implode against clinical opposition.

This was, frankly, a thoroughly average Seleção side without the Barcelona forward. Neymar was excellent in his five outings despite being under enormous pressure to deliver, scoring four goals and providing one assist before Brazil fell apart without him.

Muller’s tournament got off to a flying start, the Bayern Munich forward scoring a hat-trick in the 4-0 win against Portugal in Group G’s opener. He was also on the scoresheet in Germany's 1-0 defeat of the United States, taking advantage of his switch to centre-forward from the right wing.

Muller returned to a wide berth in the knockout phase, although his typically evasive movement meant he often popped up in central areas anyway. He broke the deadlock in the 7-1 triumph over Brazil and ended the competition with five goals – for the second tournament running – and three assists.

The Dutch side which reached the semi-finals in 2014 weren’t as brutish as the 2010 iteration, but Louis van Gaal’s team weren’t exactly practitioners of Total Football either. A nominal three-man defence frequently became five at the back, and Robben’s speed and direct dribbling made him the centrepiece of an unapologetically counter-attacking system.

The winger ran riot in the remarkable 5-1 group-stage thrashing of Spain, scoring twice to help humble the holders in Salvador. He only added one more goal to his tournament tally, but Robben was exhilarating throughout and was deservedly included on the shortlist for the Golden Ball.

Messi was chosen as the official Player of the Tournament in Brazil, but his indifferent reaction to receiving the trophy after the final suggested even the Argentine himself felt he didn’t really deserve the prize.

Yet even if Messi was fortunate to come out on top, he was still among the leading performers in 2014. Visibly fatigued from another draining club campaign, Argentina’s main man often drifted around the periphery of games before exploding into life at pivotal moments. Messi scored decisive group-stage goals in victories over Bosnia, Iran and Nigeria, dragging a fairly mediocre Albiceleste side all the way to the final.

Germany goalkeeper Oliver Kahn was named Player of the Tournament at the 2002 World Cup and Neuer could easily have followed in his compatriot’s footsteps 12 years later. His performance in the last-16 defeat of Algeria was extraordinary, the Bayern Munich glovesman taking up ludicrously high starting positions to sweep up behind his backline – a task which saw him make several crucial tackles and interceptions outside his own box.

Neuer’s mastery of the sweeper-keeper role was fundamental to Germany’s triumph, but he also excelled in more traditional duties such as shot-stopping and cross-claiming.

It’s widely acknowledged that Argentina would have come nowhere near World Cup glory without Messi, but the same can be said for Mascherano. The combative midfielder was the beating heart of Alejandro Sabella’s outfit, putting out fires in front of a ropey back four which required a fair amount of protection.

His display in the semi-final against the Netherlands was magnificent; the Barcelona ball-winner was hell-bent on denying his opponents so much as a chance, let alone a goal. Mascherano’s fine last-ditch tackle on Arjen Robben in stoppage time of that clash is one of the enduring images of Brazil 2014, but his probing passing throughout the competition was also worthy of praise.

Kroos and midfield partner Bastian Schweinsteiger epitomised this possession-based Germany side, whose ability to control games was unrivalled among their competitors in Brazil. While Schweinsteiger began their first two games on the bench, his former Bayern Munich colleague was ever-present, playing virtually every minute of every match (he was taken off deep into second-half stoppage time against France) as the Germans added a fourth World Cup to their collection.

Kroos was the outstanding player in the 7-1 semi-final evisceration of Brazil, scoring twice and relentlessly pulling the strings as the hosts collapsed in Belo Horizonte.

It may seem a little counterintuitive to pick a player who didn’t even make the semi-finals as the best the 2014 World Cup had to offer, but James’s electrifying showings in his five appearances make him a worthy winner.

The Colombian playmaker scored five times – including the goal of the tournament against Uruguay, a stunning chest-and-volley in the round of 16 – as Los Cafeteros made history by reaching the last eight for the first time. His impudent dink against Japan was also delightful, but largely forgotten after that glorious effort against Uruguay.

James was a Monaco employee when he arrived in Brazil, but did so well on the biggest stage that Real Madrid splashed out £63m on his signature a few weeks later.