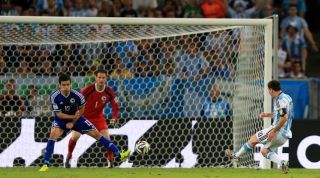 Robben’s second goal in Salvador was supreme, but it was emphatically indebted to his sprinter’s pace and came when the Oranje were 4-1 up with little time left. His first, by contrast, broke parity and required more tools.

There appeared to be little danger when Daley Blind received possession out left, but Robben dashed into space before producing an exceptional touch to bring the ball down on the edge of the box. The wide man then cannily slipped out of Gerard Pique’s handcuffs, got the ball out from under his feet and fizzed it home under pressure from Sergio Ramos – albeit via a slight deflection.

The USA were 1-0 down when a partially cleared corner fell to three-time Germany midfielder Jones 25 yards from goal – and really, there should have been no worries for Portugal with a sea of bodies in front of him.

But the enforcer showed cunning, side-stepping Nani and thundering home into the bottom corner. So good was the strike that, despite the ball being only a couple of feet to his left and at a good height, Portugal goalkeeper Beto couldn’t react quick enough to even dive for it.

Spain were merely playing for pride in their final Group B game, so 32-year-old David Villa – who had announced he was quitting international football after the tournament – started against Australia... and seized his chance in style.

Andres Iniesta’s through-ball disorientated Jason Davidson and sent Juanfran in behind the Socceroos’ defence, but the right-back’s cutback from the byline was behind Villa. Inventively, however, the forward allowed the ball – its awkwardness heightened by a slight bounce – to go through his legs before flicking home with the inside of his right boot.

Knuckleball free-kicks had enjoyed a popularity explosion in the lead-up to the 20th World Cup, but, despite several attempts, the competition had yet to see one in its early stages. That was until David Luiz chose an opportune moment to score one of his patented screamers.

Brazil led 1-0 but were under serious pressure from Colombia when the defender’s second goal in as many games – a 30-yard strike which moved in two different directions before dipping under David Ospina’s crossbar – sent the hosts on their way to the semi-finals. Given what happened, though, they probably wished they hadn't bothered.

Not one, but two Japanese players – both befuddled by Rodriguez's genius – watched his 11th-hour dink float into the net from their backsides. Los Cafateros began the move inside their own box, and seven men in yellow were involved before it reached their midfield maestro.

The rest was art. Two days after becoming the fourth-most expensive footballer in history, the 22-year-old cut inside Maya Yoshida with his first touch, hip-wiggled the Japan centre-back to the Arena Pantanal turf and craftily chipped the ball over Eiji Kawashima from close range.

A wonder goal hadn’t decorated a World Cup final in 44 years, since Carlos Alberto capstoned Brazil’s famous 4-1 victory at the Azteca. Going into the 113th minute of an energy-sapping decider at the Maracana, few foresaw one coming when Andre Schurrle went sprinting into an apparent blind alley down the left.

Despite the close attentions of two adversaries, however, the Germany No.9 managed to pick out the only man supporting him in fellow substitute Mario Gotze. The youngster’s chest control, with Sergio Romero bearing down on him, had to be impeccable. It was. So too was Gotze’s volleyed finish – which won Germany the trophy.

Messi hadn’t scored in almost 10-and-a-half hours of World Cup action – a drought that didn’t immediately look like ending when he received possession deep inside the opposition half.

But then again, when does Messi ever need much to make magic? First there was a burst from beyond; then a one-two with Gonzalo Higuain, followed by a side-step so slick it sent two Bosnians crashing into one another. The Argentine genius finished his slick move with a guided strike in off the post to get the masses of Argentines crammed inside the Maracana rocking. “Luckily it all came off,” Messi toldFourFourTwo.

Australia had only just fallen behind to Robin van Persie's opener in Porto Alegre, but within a minute Cahill hit back with this stunner. After allowing Ryan McGowan's high, hanging ball from the right to drift over his left shoulder, the Socceroos talisman thumped a blistering volley home off the underside of Jasper Cillessen’s crossbar – and with his weaker foot.

“I can’t explain how it felt to score that goal – it was like an out-of-body experience,” Cahill told FourFourTwo four years later. “I’ve always been a strong believer in just taking a chance. I know I’m either going to hit the back of the net or Row Z, and mentally, it doesn’t bother me if it hits Row Z, as I will do it again – I’ll look for another moment to make somebody say, ‘Wow’.”

“I scored innumerable headers – some I’m very proud of – but I never scored one close to being that good.”

The reflections from one of football’s finest-ever headers of a ball on what is, probably, the most famous header in history.

Pele wasn’t the only one wowed by Robin van Persie’s goal, a first-time, diving lob of Iker Casillas from a long, diagonal punt forward from Daley Blind that kick-started one of the World Cup’s most shocking scorelines (Spain 1-5 Holland). 'Persieing' immediately became a social media craze, while the goal spurned a flipbook animation, limited-edition coin and graffiti gold on the walls of a Brazilian favela.

“I dreamed and dreamed of scoring at the Maracana – a tap-in, any goal – I was just desperate to score there,” explained Rodriguez. The goal that realised that goal for the Cafeteros No.10 was the polar opposite of a tap-in.

With his back to goal, 25 yards out and 28 minutes into a goalless last-16 clash with Uruguay, Rodriguez chested a looping header over his own head, swivelled instantly and unleashed a ferocious, dipping volley which crashed in off the underside of the crossbar.

Unsurprisingly, it won Rodriguez the goal-of-the-tournament prize and that year’s FIFA Puskas Award.