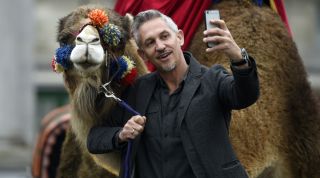 Forget Sané, Salah and Shelvey: these are the squad announcements that really influence your World Cup enjoyment.

Yes, ITV and the BBC have their line-ups ready, and there are some intriguing selections here too: potentially explosive, in places. Boring and annoying in others. So we’ve thrown together our fantasy cross-channel punditry panels, for maximum TV drama. Let prattle commence!

The Golden Generation get the Golden Boot. It must be odd for genuine World Cup legend Lineker (top scorer in 1986, semi-finalist in 1990), having to ask big BBC signings Ferdinand and Lampard for their expert opinions on prospering at tournaments. Like they’d know. Watch the body language if Murphy and Lampard meet too, as Danny suggested recently that Frank might struggle at Derby, due to him being too successful a player. Not with England he wasn’t.

Everyone eventually asks Gary what it’s like to get a semi.

Evra still gets jobs despite being an absolute aggro magnet: last season the feisty Frenchman kung-fu kicked a fan, and he famously shouldered much of the blame for LesBleus' implosion at World Cup 2010. They got there due to Thierry Henry’s handball against Ireland, of course, and cult hero Kevin Kilbane was particularly peeved. We’ll get Jonathan ‘Robot Wars’ Pearce to referee their inevitable ruck.

Kilbane’s bitching is defused somewhat by Evra clearly having no idea who he is.

BBC Breakfast host Walker was once an obsessive Hoddle fan, even lobbying his parents to rechristen him ‘Glenn’. They now have a rare link: both attracted newspaper interest due to religion/career issues. Hoddle’s views helped cost him the England job in 1999, while Walker may never do the World Cup final, as he doesn't work on Sundays. For further Hodulation, we’ll also bring in Wrighty: even 20 years on, he still calls Glenn ‘gaffer’.

They all agree that England’s midfield desperately needs a Hoddle. They’re not wrong.

It’s probably best that Martin ‘meeeow’ Keown and Iain ‘wowie’ Dowie don’t actually share the same channel and panel: these games often kick off pre-watershed, after all. This terrifying duo were stitched together by evil scientists before turning to football, and both are now generally confined to the gantry, safely off-screen. ITV commentator Matterface gingerly joins them, just because the surname sounds appropriate.

That sleazy World Cup cameraman who always films the sexy spectators gets a horrible shock.

Who? Robbie Savage, Alan Shearer and Chris Sutton (all BBC)

Savage will host a daily BBC 5 Live breakfast show during the World Cup, while on TV he’s developed an unlikely bromance with the dedicatedly dull Shearer. They bonded during Sport Relief but really shouldn’t get on, given their wildly different personalities and the fact that Alan once booted Sav’s Leicester team-mate Neil Lennon in the head. For extra irritation, let’s add Shearer’s old strike partner, contrary Chris Sutton, then consign them all to World Cup purgatory: the final group games’ dead rubbers.

Who? Mark Lawrenson, Kelly Cates, and Guy Mowbray (all BBC)

Still roaming BBC gantries like a wailing northern ghost, Lawrenson’s wit isn’t universally welcomed. On 5 Live in May, he made headlines by muttering “equal pay” when someone mentioned Cates’s big handbag. Not helpful. More bizarre was his on-air awkwardness at World Cup 2010, with commentator Guy Mowbray, who’d evidently reached the end of his tether. “You alright?” said Lawro. “I’m fine!” grumbled Guy. “Thanks for asking.”

Lawro gets the silent treatment, the hint, and finally retires?

Two notable new Beeb signings, one of whom may well have nightmares about the other. “He was really, really strong,” a pained-looking Zabaleta told one TV interviewer. “Next to me, with his arms [does elbow gesture], like a rock.” Ouch. Tyldesley and Drogba would be an interesting pairing too, given Clive’s curious comments at the 2012 FA Cup Final, following the striker’s appearance on a famous chat show. “Didier Drogba, he’s just a big loveable lump really,” said Tyldes. “Graham Norton seemed to get inside him last night.”

Clive decides to leave the quips to Lawro.

Who? Martin O’Neill, Henrik Larsson and Ally McCoist (all ITV)

This reunion will bring a tear to every Celtic fan’s eye, and cause some beer-battered screens for unsuspecting Bluenoses. Martin O’Neill is entertainingly cantankerous at tournaments, famously dissing fellow pundits Patrick Viera, Fabio Cannavaro and, erm, Robbie Williams, over the years. But hooking up with his old striker Henrik would be like The Beatles getting back together. Best throw Ally in there for balance.

Coisty slaps all 10 of his Scottish Championship medals on the table. Take that.

Bilic admitted in 2016 that he didn’t mind his West Ham players diving, which makes sense: browse YouTube and you’ll find new ITV colleague Oatley’s views on him getting Laurent Blanc sent off in the 1998 semi. Meanwhile, Sparks will become the Beeb’s first female World Cup commentator this summer, a year after Bilic’s replacement, David Moyes, said she might "get a slap" while at Sunderland. Turns out he’d also allegedly ranted swearily at Oatley, back in 2012.

They bond while singing a boisterous chant about David Moyes’s career.

1. Man United vs the ref

Clattenburg would probably be officiating at this tournament if he hadn’t scarpered to Saudi Arabia mid-season, leaving Britain with no referees in Russia: he’ll be doing ref-on-ref punditry action instead. But ITV also have a glut of Fergie-era Manchester United legends, including the borrowed-from-Sky Gary Neville. And you know what always happened when referees wound them up.

Clatts disputes one of Giggys’s points so Keano and Neville get all up in his grill like it’s 1999.