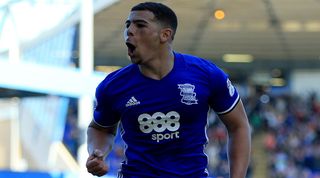 Last season was one of the worst in living memory for West Brom supporters. Embarrassing results on the pitch were matched only by laughable events off it, when some of the club’s senior professionals allegedly stole a taxi during a trip to Spain that was designed to boost morale and restore order. In the end, the permanent appointment of club legend Darren Moore after a successful caretaker stint was at least able to lift the mood around The Hawthorns – even if avoiding relegation was a miracle too far.

West Brom’s rookie manager is keen to give youth a chance, and the clever passing and impressive work-rate of Sam Field should shine through. The 20-year-old midfielder scored his first Premier League goal last season in a 2-2 draw with Newcastle, and the England U20 international should be able to display more of his craft now that he's unlikely to be part of a team which is just struggling for survival.

Every year, Brentford sell some of their best players but are able to impressively regenerate and perform, consistently finishing in the top 10 of the Championship. Three of their leading names joined Birmingham for big fees late last summer, but the Bees still finished well clear of Blues.

Brentford’s data-driven recruitment strategy has helped them identify plenty of bargains in recent times – and Ezri Konsa could well be another for 2018/19. The England youth international centre-back arrived from Charlton for an undisclosed fee and will hope to slot in alongside Chris Mepham. A strong and technically-assured defender, several Premier League clubs were linked to the 20-year-old (including Arsenal, Chelsea Everton and Liverpool), but Brentford offered the best platform for Konsa to get game time and progress.

Although still only 24, Powell hasn’t pushed on as so many hoped he would after joining Manchester United from Crewe back in 2012. The goalscoring midfielder was one of Sir Alex Ferguson’s last signings and touted as a potential successor to Paul Scholes, but an apparent lack of dedication to his craft led to a drifting career. It finally got back on track at Wigan last year.

In League One, Powell was a cut above the majority of players he came up against, and operated as the attacking luxury in Paul Cook’s well-drilled side. Bids from Bournemouth and Brighton were rejected in January, and Powell now has the chance to continue rebuilding in the Championship at a club that understands how to get the best from him.

As a key component in a fluid title-winning side, it was a surprise to see Douglas so readily discarded by Wolves. Signed from Konyaspor just last summer, the left-wing-back enjoyed a brief but eventful Molineux career. His stamina, technical skill and set-piece precision helped Wolves to the Premier League at the first attempt under Nuno.

The 28-year-old Scotland international never looked out of place among the club's high-profile imports, and was expected to get his chance in the top flight until a surprise move to Leeds last week. He was unlucky to miss out on a place in the Championship Team of the Year after registering five goals and 14 assists (the joint-highest in the division). Douglas has proved what he can do at this level and will be a major asset for new boss Marcelo Bielsa.

After unexpectedly being shifted up front by manager Lee Johnson last season, Bobby Reid proved himself a terror for Championship defences. His record goal return earned him a move to Cardiff, and his replacement at Ashton Gate is the lively Eisa. The Sudanese striker almost single-handedly kept Cheltenham out of trouble in League Two during his first season as a professional footballer.

He scored 23 goals, at a rate of better than one every other game, and will be hoping to make light of the two-division leap. The 24-year old is a different and far more direct player than Reid, but has big shoes to fill as Bristol City look to compensate for lost firepower and make another push for the play-offs.

Since signing for Birmingham two years ago, Adams has been forced to endure plenty of upheaval. The bustling striker has the potential to be one of the Championship’s best forwards, but has contended with multiple managerial changes, various different systems and often been played out wide. He's at his best when rampaging through the middle, so perhaps Garry Monk can provide the stability both player and club need.

An ongoing transfer embargo has meant minimal changes to last year’s squad, and with the Blues looking a little light up front, the onus will be on Adams to make this his breakthrough season. At 22, the time is right to turn potential into concrete achievement. Injuries were an issue last year, but if Adams enjoys a clear run he could be one of the division’s top scorers.

The attacking midfielder had already established himself as one of the best players in League One during his time at Gillingham, but last year’s move to Blackburn lifted his performances to another level. Signed for just £750,000, that fee was soon made to seem a snip as he registered 18 goals and 11 assists in 45 appearances during a memorable debut season.

Full of energy and endeavour, Dack also boasts technical ability and can play on either flank or through the middle. This will be his first taste of Championship football, but the reigning League One Player of the Year has nothing to fear and some sparkling performances in pre-season bode well for the season to come. The 24-year-old will be pivotal to Rovers’ hopes of success as they look to build on the momentum they’ve gained under Tony Mowbray.

With an influx of Portuguese players, and the looming influence of Jorge Mendes, Nottingham Forest seem intent on taking the Wolves route to promotion. Having made 11 new signings, they’ve been installed as one of the favourites to win the league by bookmakers and were impressive in a 2-0 over Bournemouth in their final pre-season friendly.

Of the many arrivals, Gil Dias stands out as the most exciting. The 21-year-old Portuguese winger signed for Monaco in 2015 but has spent much of his time on loan elsewhere, including Rio Ave and Fiorentina. He has already displaced Joe Lolley, who finished the campaign strongly, and his trickery adds another dimension to Forest’s attack. They also have the option to make the deal permanent if Dias continues to impress.

The Rams have been unofficially, somewhat gratingly, rebranded as ‘Frank Lampard’s Derby County’ for the foreseeable future – but becoming the launch pad for the former Premier League star’s managerial career does come with certain benefits. One is ready access to talented players from the Chelsea youth system on favourable terms.

Mason Mount has arrived on a season-long loan deal, having demonstrated his quality during a productive spell in the Eredivisie. The 19-year-old midfielder, who plays in the mould of his manager and idol Lampard, scored 14 times for Vitesse last season and was named their player of the season.

Mount was also named best player of the European Under-19s Championship as England won the tournament last summer – and was subsequently invited to train with the senior squad by Gareth Southgate ahead of the World Cup.

Stoke will be hopeful of bouncing back to the Premier League at the first attempt, and new manager Gary Rowett has been busy adding new faces to steel the Potters for the demands of a testing Championship season. While most will be familiar to English football fans, Oghenekaro Etebo is relatively unknown.

Yet Rowett did well to pounce before the World Cup started, as the Nigerian midfielder’s impressive performances in Russia would no doubt have substantially increased the asking price. As it is, Stoke signed Etebo from Portuguese side Feirense for £6.35m and could well have a bargain on their hands.

Capable of playing a holding role or being pushed further forward, the 22-year-old is an excellent all-rounder. On top of his driving runs and boundless energy, he also packs a fierce shot. Championship goalkeepers have been put on watch.