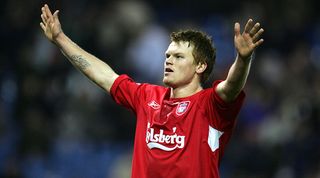 Falcao might not have impressed at Old Trafford or Stamford Bridge (no thanks to his physio fetish), but El Tigre proved himself capable of stonking home net-busters like this either side of those disheartening spells in England. This one was casually dispatched in a May 2012 friendly for Atletico Madrid in his native Colombia.

Falcao had absolutely no right to attempt an effort on goal after eyeing up Diego's drifted corner, but with his back to goal 16 yards out, the striker launched legs over head to rifle an obscene overhead kick into the top corner. Filthy.

Let’s start at the end and work back: Owen’s finish is a good one, controlled and accurate, giving the Greentown goalkeeper no chance. His first touch was similarly immaculate, as Manchester United went all Harlem Globetrotters on the Chinese side in July 2009.

The beauty of the goal, however, is in its conception. This is a bona fide instance of Berbarotica, an authentic crystallisation of all that the Bulgarian stands for.

Setting aside his snuff box and cane for an instant, our 18th century man of leisure dollies the ball up for himself, attracting no fewer than six Greentown players like bees to a particularly beautiful flower. Then he clips a delicate pass over the defence to help set up an onrushing Nani to cross in. Seven minutes later, The Toff scored himself (with an unneccessarily sideways volley); United ended up 8-2 winners before our elegant hero settled down in front of a warm fire at his stately home, content with the evening’s work.

How do you even describe this goal? A series of juggled backheels followed by a lob? Three consecutive scorpion kicks? Benayoun’s glorious individual strike in Chelsea's opening pre-season friendly of 2011 defies description by the written word.

It also suggests that, when not at training or playing in matches, Yossi is a committed proponent of the hacky sack as a tool to improve one’s touch. Students everywhere rejoice.

Now, this is more like it. Yes, the finish is a good 'un, straight from the Roberto Carlos school of hopeful smashes, as Liverpool set about demolishing Celtic 5-1 in a July 2004 friendly.

What makes this footage genuinely special, however, is the attendant American soccer shtick. Firstly, there’s the fantastic 'I’ve started so I’ll finish' mentality behind extending the word “Riise” over what feels like a fortnight: “There’s literally no way that ending this syllable and starting a new one can adequately convey the excitement of this moment.”

But things get even better with the scream of “RELEASE THE KRAKEN!” There just aren’t enough commentators willing to use hyperbolic mythical metaphor to describe goals. And that is something that we all should be very sad about.

OK, so we're bending the rules here – this one wasn't exactly a meaningless game, and nor was it even in a friendly. But there was no one there to see it at San Siro, after Inter were forced to play four European games behind closed doors in 2005/06 following trouble in the Milan derby.

Porto striker Hugo Almeida was hardly prolific during his spell at the Estadio do Dragao (nor anywhere else, in truth), which is somewhat baffling for a man who can bash a football like this. You know it's a good hit when a goalkeeper stands no chance of saving it from 45 yards out, which is just what Almeida managed with a free-kick that defied logic.

It proved his only European goal for Porto, and ultimately mattered little – they lost this game after conceding twice in the last 10 minutes, and finished bottom of the group.

NEXT! The most satisfying Thierry Henry goal... ever?

Super Pippo, The World’s Greatest Poacher©, uses an August 2010 friendly at the Camp Nou to demonstrate that he did exist outside the confines of the six-yard box.

Clarence Seedorf’s cross-field ball, although impressive in its conception, leaves our protagonist with plenty of work to do – what with the ball dropping over his shoulder, and onto his weaker left foot. Inzaghi, however, is unperturbed. Hurdling joyously into the Catalonian air, he unleashes an impeccable volley, bending the ball beyond Jose Pinto and into the top corner.

Also noteworthy is the appallingly lifeless commentary; Inzaghi’s strike is welcomed with deafening silence. A goal of this quality surely deserved, at the very least, an incoherent proclamation of awe. As Super Pippo told FourFourTwo: "I know I am remembered as a player who scored most of his goals from close range, but I think that this goal shows I could score spectacular ones as well." Indeed, sir.

GREAT GOALS RETOLD Inzaghi: 'I proved I could do the spectacular too'

Football is all about subtlety, tactical warfare and careful, patient build-up. On occasion, though, it’s also about simply clobbering the ball into the net from 30 yards out.

This goal, from a 2009 pre-season friendly in Baltimore, represents the game at its corporeal best; it is a feat of raw physical brutality, one that no meticulously calibrated defensive line could even hope to stop.

The first thing you notice from this July 2005 friendly is that Philippe Senderos actually manages to find a team-mate with a pass more than eight metres in length.

That, in itself, warrants praise. What follows is truly delightful, however, even by Henry’s absurdly high standards. Instant control with his chest is followed by a nonchalant flick past an unsuspecting defender. One casual waft of his left foot later, and the ball nestles in the corner of the net. Staggering.

Another from a summer Manchester United tour to Asia, this one in 2007. Ignore the commentator’s inexplicable bafflement at the concept of the loan system. Ignore the fact that Shenzhen appear to be in the midst of some self-initiated defensive charity hour. Ignore the fact that the assist may well be accidental. Simply revel in the purity of that volley.

When you channel footballing godliness as frequently as Zizou did, some of your masterpieces are bound to be left rotting in the bargain bins. This August 2004 goal, however, deserves to be dusted off.

A pirouette, a stepover, and a semi-scuffed poke into the corner, all with just two touches. Verdy good indeed (we're not even sorry).

LIST 8 players who were bigger than the club (or thought they were, anyway)