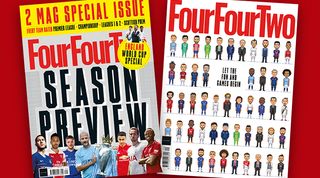 1. Forlorn in the Forest

QPR have never won at Nottingham Forest. Ever. That’s not ‘in the Premier League era’, or ‘in cup competitions’, or ‘on a Thursday’ – it’s across all 34 of their meetings at the City Ground, stretching back to a 4-0 Forest win in 1934.

It has become tradition for Rs fans to travel to Nottingham in numbers, hoping they’ll see history made. This season’s fixture is on December 22. Well, it’s good to get the Christmas disappointment in early.

Several Hamilton Academical alumni had a big impact at this year’s World Cup. Luis Rubiales is best known as the man who sacked Julen Lopetegui two days before Spain’s first game (and a month after Rubiales himself was appointed), but he also played four games in defence for the Accies in 2009. Ex-Hamilton striker Graeme Jones, meanwhile, has been Roberto Martinez’s assistant manager for over a decade and, as such, helped Belgium to third place in Russia.

Finally, Allan Russell spent four years in Hamilton’s starting XI but was most recently England’s attacking coach in Russia as Harry Kane won the Golden Boot. Gareth Southgate heaped praise on the Scot for his work in making England a unique threat from set-pieces, even if Southgate received most of the plaudits for having “weaponised queuing”. Still, Russell had no influence on the size of Harry Maguire’s head… we assume.

In November, Sunderland will host Wycombe in League One. That would have seemed impossible four years ago. On the final day of the 2013/14 League Two season, Wycombe won 3-0 at Torquay to stay in the Football League on goal difference, and at exactly the same time – a 3pm kick-off on May 3, 2014 – Sunderland won 1-0 at Old Trafford. You’ve got to laugh. No? OK then.

In 1981, ‘the Notts County Choir’ released County’s The Team For Me, for reasons best unknown. It’s available on iTunes, though you should know that then Radio One DJ Noel Edmonds called it “the worst pop song of all time”. Come on, Noel, it’s not even Notts County’s worst pop song.

Since promotion replaced re-election in 1987, no team coming up from the National League (The Artist Formerly Known As The Conference) has gone straight back down again. In fact, nine of the 43 promoted sides rode the wave of momentum and sailed immediately on up to the third tier.

Football League new boys Forest Green Rovers did give relegation a bloody good try last season, finishing one point above relegated Barnet. However, their survival means it’s on Tranmere and Macclesfield to avoid setting an unwanted first in 2018/19.

6. Bevvies for the Levy

Last season, Tottenham’s wage bill was closer to the Premier League’s lowest, that of fellow overachievers Burnley, than it was to Arsenal’s in fifth. Yes, yes, we know – where’s their trophy…

Yeovil manager Darren Way does things in his own… well, way. The club’s Huish Park ground is covered with everything from motivational quotes to pictures of majestic lions (you have to take some liberties when your nickname is the Glovers). Meanwhile, Way’s players are given ‘warrior cards’ to keep, which remind them of their individual goals and strengths. Presumably each player also shares one uniting goal: ‘Put up with this malarkey’.

Oldham, a club that younger fans of Premier League teams might naively assume have bounced around the bottom few divisions for some time, are in fact entering their first season in the fourth tier since 1970/71. Indeed, they’re still on the same gentle downslope that took them out of the Premier League in the early 1990s.

For some bored Oldham fans, however, the icy embrace of League Two may come as a relief. Relegation in May brought an end to 21 consecutive years at League One level for the Latics, including a run between 2009 and 2017 in which they finished between 15th and 19th – their points totals between 51 and 57 – for eight years in a row. Consistency’s great and all, but after that long circling the drain, a new challenge might be exciting – although FourFourTwo’s prediction for 2018/19 is that Oldham may not have finished falling yet…

Stoke anthem We’ll Be With You, released to celebrate the Potters reaching (and then winning) the 1972 League Cup Final, was written by Jackie Trent and Tony Hatch – who also wrote the theme tune to student staple Neighbours. We’ll Be With You made the UK Top 40, but even more impressively, the Neighbours theme’s Wikipedia entry is over 2,000 words long.

Cardiff are re-entering the Premier League on the back of a stat-breakingly remarkable promotion campaign. Neil Warnock’s men finished second despite having the Championship’s worst pass completion (59.4%), fourth-lowest possession count (45.4%) and second-highest foul count – yet they also had the second-most shots on target in the division, and the second-highest xG value per game.

Passing: who needs it?

Doncaster are the holders of the Yorkshire Electricity Cup, which ceased in 1995 after four instalments across a glorious six years. The other two winners were Halifax (twice) and Huddersfield.

Bring it back, we say.

12. Could have been ruff

Bury, demoted to League Two, launched their promotion bid by unveiling a new arrival who promises to add some bite, hound opponents and – look, it’s a dog, all right? Their new mascot is a dog.

Peeler the police dog has replaced Robbie the Bobby after the club finally realised that all human mascots look creepy and weird. The friendly hound is monikered after Bury-born Sir Robert Peel, who introduced the first police force and whose name inspired the terms ‘Bobbies’, ‘Peelers’ and ‘The Filth’ (we think). But Bury got lucky: in a vote to choose the mascot’s name, ‘Peeler’ received 387 votes while the runner-up, with 386, was ‘Giggles’. Giggles? The Filth would be turning in his grave.

Taking Bury’s place in League One are Coventry, after they recorded one of 2017/18’s happier statistics: their first top-six finish in any division since 1970. Say what you like about owners SISU, but… no, just say what you like.

Roy Hodgson led an extraordinary transformation at Crystal Palace last season, as the club ended on level points with the top half despite having lost their first seven games without scoring. But maybe we should have seen it coming.

The Eagles’ five Premier League placings since their most recent promotion have been 11th, 10th, 15th, 14th and 11th – yet they’ve been in the bottom four on New Year’s Day in four of those five seasons. The one year Palace weren’t having an unhappy hangover on January 1, they were sat as high as fifth… before posting their lowest finish of 15th. Go figure.

In a) the 25-year-old former non-league winger, and b) the 22-year-old Welshman signed from Liverpool, Rochdale have two players called Jordan Williams. What’s the betting that both are nicknamed Williamsy?

Nobody would be surprised to learn that there’s a difference between the playing budgets of the Old Firm giants in Glasgow and that of Hamilton Academical 12 miles down the road. However, the scale of that pay gap within the Scottish Premiership is pretty shocking.

At the top you have Brendan Rodgers’ Celtic, whose average weekly wage for a player last season was over £14,000. On the second rung, only just within reach, are Rangers and their average weekly wage of £6,300 – less than half what their rivals pay. And then there’s Hamilton, clinging on to the bottom of that same ladder with an average weekly wage for one player of – wait for it – £798. They’re clutching at the ankles of Motherwell (£820) above them. One league, three different worlds.

In the 1976 sci-fi film Logan’s Run, our future is a hedonistic utopia (or is it?) that is maintained by the ritualistic murder of every citizen the moment they turn 30. Look on the bright side: in the book, it’s 21. Anyway, the famously forward-thinking recruitment gurus at Brentford are apparently big fans, because the Championship side don’t have a single outfield player older than 29. The exception in goal is old man Luke Daniels, who is 30 and can remember when Griffin Park was all fields. Irish midfielder Alan Judge must be feeling very nervous about entering his fourth decade in November.

We’re joking, of course. Isn’t it weird, though, how Lasse Vibe suddenly disappeared last season aged 30, having just scored seven goals in eight games? And how first-choice centre-back Andreas Bjelland was released this summer, the week before his 30th birthday? Still – nothing to worry about, Alan. Probably.

At the end of the 1931 season, Wycombe played their final two league games on the same day, against the same opposition, at different grounds. On May 2, Kingstonian beat Wycombe 2-0 at home. Also on May 2, Wycombe beat Kingstonian 4-0 at home. Win some, lose some.

Last season, Brighton’s Premier League survival was mathematically confirmed on May 4 when they beat Manchester United 1-0. Avoiding relegation with two games remaining represented a job well done, if a little close to the wire.

Yet Brighton were actually safe a whole two months earlier. A 2-1 win over Arsenal put the Seagulls on 34 points as early as March 4 – and 34 points would’ve been enough to stay up at the season’s end. Of course, Brighton weren’t to know that, and three points from their next six games ensured a much nervier spring than they’d have liked. Oh, how they must laugh, looking back.

Although Macclesfield’s miracle-working manager John Askey has left to manage Shrewsbury, having taken Macc back into the Football League, we profoundly hope one tradition will continue.

Askey regularly found himself positioned in front of a cheese board, a snifter and the effusive Nick Bianchi of shirt-sponsoring furniture company Arighi Bianchi, who, his hand on Askey’s shoulder, asked him about the day’s game for his ‘Red Wine Interview’ series. Special guests have included Shay Given and a cheeky Malbec from Alderley Edge. More of this in 2018/19, please.

Get your hands on the September 2018 of FourFourTwo magazine – our famous Season Preview special, complete with 98-page supplement – in shops from Wednesday, August 1. Or go one better: subscribe!