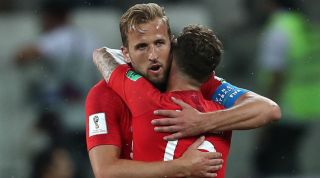 Much has been said and written about the Belgians’ so-called golden generation – mainly questioning their ability to come together as a team and shake off the perception that they’re a group of brilliant individuals rather than a great side.

If Lukaku continues playing as he did against Panama, particularly in the second half, those questions may be silenced. Eden Hazard was quoted as saying that Lukaku was “hiding” in the first half, and that he told him so at half-time. Some may consider this further evidence of disharmony in the Belgian camp, but equally it could be seen as the opposite: a captain encouraging one of his major players with some tough love. It worked.

Serbia skipper Kolarov enjoyed an excellent season with Roma and scored the goal that took three points for Serbia in their opener against Costa Rica. Their Central American opposition had only lost twice in 16 qualification matches and took some breaking down, requiring Kolarov’s thunderous free-kick shortly after half-time which gave Serbia the win – vital with Switzerland and Brazil to come in Group E.

Kolarov’s goal was the 11th  for his country, having scored twice in qualification for this World Cup and four on the road to Brazil 2014 – but this was his first at an international competition.

In the first round of group stage matches, nobody made more key passes than England wing-back Trippier. Of the 14 chances England crafted against Tunisia, the Spurs man was responsible for six of them. In perspective, only one Three Lions player – David Beckham – has carved out more opportunities in a single World Cup match since England lifted the trophy in 1966.

It was also Trippier who stayed within the confines of the pitch as the rest of the team celebrated Harry Kane’s winner – meaning Tunisia weren’t able to kick off unopposed and grab an equaliser (a strange rule, apparently, which nobody seems able to find evidence of).

Iceland continue to go from strength to strength, and have long proved that Euro 2016 was no fluke. Just qualifying for that tournament two years ago was an exceptional achievement for a nation with a similar population to Coventry; to reach the quarter-finals was utterly remarkable.

Getting to World Cup 2018 ahead of Croatia, Turkey and Ukraine in qualifying cemented their growing reputation, but in Russia they face arguably their toughest test yet to progress from a group featuring Argentina, Croatia and Nigeria.

It’s so far, so good though. While the Argentines boasted 78% possession, out-passed Iceland 752-209 and had 27 shots on goal in the first game, Iceland fought hard for their first point in World Cup history courtesy of Finnbogason’s equaliser.

‘Chucky’ Lozano was many people’s player to watch coming into the tournament – and his performance against the Germans didn’t disappoint.

He top-scored for Mexican side Pachuca as they won the CONCACAF Champions League a year ago, raising his profile enough to get a move to Europe with PSV.  His first season in Eindhoven was spectacular, with the 22-year-old’s 17 league goals from a wide position helping firing PSV to the Eredivisie title.

If the opening group stage match is anything to go by, Lozano has carried his club form into the World Cup for Mexico. For his winner against Germany, the livewire forward kept his composure brilliantly to take a touch and fire beyond Manuel Neuer. His countrymen back home did anything but keep their composure – the celebrations in Mexico City caused a minor tremor.

Russia were written off before the tournament, with few experts – or locals, for that matter – giving them a chance of even making it out of the group. They were one of the two lowest-ranked teams in the competition (partly thanks to a lack of competitive action) – along with opening match opponents Saudi Arabia – and everything pointed to Stanislas Cherchesov’s side becoming only the second host nation to fall at the first hurdle.

They were defensively weak (38-year-old Sergei Ignashevich came out of retirement to bolster a depleted backline) and goals were expected to be thin on the ground (partly because of injury to Aleksandr Kokorin); Russia hadn’t won in their previous seven matches, failing to score in three.

All in all, the World Cup was to be a disaster of previously unseen proportions. But those pre-tournament predictions were made to look pretty silly in the opening two matches thanks to the likes of CSKA Moscow schemer Golovin. The highly rated 22-year-old created two goals and scored another as the home nation ran out 5-0 winners against Saudi Arabia.

‘Memo’ Ochoa made nine saves against Germany, making him the busiest net-minder in the first round of games. His almost single-handed thwarting of their attack brought back memories of his man-of-the-match performance against Brazil in the group stage four years ago, where he kept the tournament hosts and overwhelming favourites at bay in Fortaleza.

If he’s able to maintain the outstanding form he seems to always find for the national team, Mexico may make the coveted quinto partido (fifth World Cup match) or more in Russia.

In one match, Kane scored twice as many World Cup goals as England’s record goalscorer managed in 11 matches on the biggest stage. Wayne Rooney netted only once at international football’s showpiece event – in defeat to Uruguay four years ago. Not since the final group game of Euro 2012 did Rooney score a tournament goal that delivered victory for England.

That Kane has surpassed Rooney’s total means little, of course, but it bodes well for the rest of the tournament and for England going forward. If international football was a step too far for Rooney – or maybe more reasonably, for England at that point – we already know it isn’t the case for England’s new captain who has taken his club form to Russia.

Mexico have taken part in the last six World Cup tournaments, making it out of the group stage but no further than the first knockout round every single time. The quinto partido has become an obsession in Mexico, and the quarter-finals are a barometer for success among fans and media alike.

El Tri haven’t been that far since they last hosted the competition back in 1986 – when only five of their current squad were born – but the early signs suggest this could be the year after a sensational result against reigning champions Germany.

Key to that win was the performance of Herrera – the Porto man patrolled the midfield and easily came out on top against Sami Khedira and Toni Kroos.  A magnificent display.

Former Chelsea man Costa was at his belligerent, irritating and devastating best against Portugal, with his first goal a thing of brute force that left everyone’s favourite pantomime villain, Pepe, on his backside as the net rippled.

But while that was all his own doing, his second was a striker’s goal – in the right place at the right time to finish off a sweeping team move. If not for Ronaldo’s incredible performance against Spain, Costa would have been the catalyst for a vital victory over their closest rivals.

Either way, he’s giving a good account of himself in Russia after a nightmare 2014 World Cup in his birth nation of Brazil, and even seems to have luck on his side – the winning goal against Iran came after Ramin Rezaeian hacked a clearance off Costa’s shins and in.

It hasn’t quite worked out that way; although the Celeste are indeed through with two wins and no goals conceded, their pragmatic (to be kind) approach has stifled their attacking prowess. For many sides that would be a big problem, but less so for Uruguay, who boast arguably the best centre-back partnership in the competition.

Luckily for Oscar Tabarez, they love scoring international goals too: Gimenez’s wonderful header was enough to secure all three points for a lacklustre Uruguay against Egypt in their opening match.

Cheryshev started Russia’s World Cup opener against Saudi Arabia on the bench, and on the fringes of Stanislav Cherchesov’s Russia side. Ninety minutes later, the Villarreal winger had grabbed a record: the first substitute to score in a World Cup opener, which he added to with another in the 91st minute.

Cheryshev’s first goal was lovely – a beautiful touch to both control the ball and commit two defenders, before rifling it into the top corner beyond Saudi keeper Abdullah Al-Mayoof. His second – Russia’s fourth – was even better. After getting on the end of Artem Dzyuba’s knockdown, the 27-year-old’s first touch controlled the ball perfectly and his second, struck with the outside of his left foot, sent it sailing over Al-Mayoof and into the net.

That earned him a start against Russia to replace the injured Alan Dzagoev – and a third goal of the tournament in Russia’s 3-1 victory over Egypt. Nice.

QUIZ Can you name the 50 highest-appearing FORMER Premier League players at the 2018 World Cup?

Portugal were generally overlooked in the run-up to the tournament, despite being reigning European champions. The utilitarian way in which they won Euro 2016 was seen much more as a weakness than a potential strength, yet their ability to get a result when they don’t deserve it has proved to be a huge plus once again.

Portugal weren’t particularly great against Iberian neighbours Spain, then scrapped a 1-0 against Morocco having been the inferior side for much of the contest. Neither nation could cope with Ronaldo, whose development from being one of the game’s best wingers to its best penalty-box predator is nothing short of remarkable.

He was perfect against Spain to the tune of a hat-trick; the difference between a point and a hammering. His headed winner from a corner against Morocco took him above Ferenc Puskas and into second for all-time international goals.