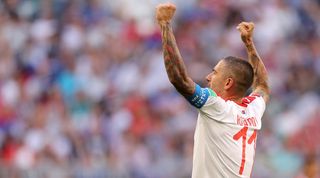 The Premier League is such an international landscape that club fans can find allegiances across the World Cup.

Huddersfield’s ‘pasty Pirlo’ Aaron Mooy is pulling strings for Australia, Manchester City fans will have cheered when Sergio Aguero broke his World Cup duck for Argentina, while we assume the entire of Leicester went ballistic when cult hero Shinji Okazaki came off the bench for Japan.

That ranges from the Spain international with almost 300 Premier League games to his name, to the Belgian who played just 27.

Ten minutes are on the clock and each player’s Premier League games and national team are below. Get guessing – then let us know how close you came to a perfect score @FourFourTwo. Then challenge some friends while you’re at it...

*Asterisk indicates that the player's team was relegated in 2017/18