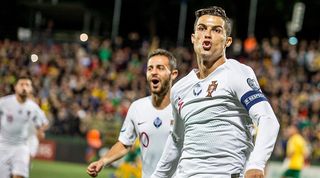 And now Cristiano Ronaldo is just 10 goals away from the record, and closing in fast. Or, at least, as fast as he can

In the May issue of FourFourTwo, on sale now, we look at Ronaldo's incredible journey that has taken him to the cusp of international immortality – and also caught up with the legendary record goalscorer Ali Daei, to find out how it feels to be hunted by none other than CR7.

The second highest still active scorer in world football, sandwiched between Cristiano Ronaldo and Lionel Messi, no less. Sunil Chhetri is known as Captain Fantastic in his homeland, and holds the record for both caps and goals for India.

His best scoring year was 2011, when he banged in an impressive 13 goals in 17 appearances. Now 35, Chhetri probably appreciates it might be too late to grab the number one spot for himself.

No relation to Majed. Part of the Kuwait team that won two Gulf Cups and reached the semi-finals of the AFC Asian Cup, Bashar scored 75 goals in 133 games between 1996 and 2007.

In 2000, the Bash (presumably) scored eight times in Kuwait’s 20-0 victory over Bhutan. Four days later, he put five past Nepal, and in the early noughties regularly terrorised the likes of Singapore, Palestine and Uzbekistan. Helpful opposition for a list like this.

Add the 18 goals Pele scored for Brazil in 21 unofficial games, and he’d be second on this list. In official internationals, Pele scored 77 times in 92 games – and he wasn’t even an out-and-out striker.

Aged 17, he netted twice in the 1958 World Cup Final against Sweden, after a hat-trick against France in the semis. Pele scored six more international hat-tricks, and in four World Cups played 14 games, scoring 12 and setting up another 10.

He got Brazil’s 100th World Cup goal with a header in the 1970 final against Italy. Timing is everything.

The Malaysian's remarkable scoring record is all the more impressive when you factor in that Abidin Hassan won many of his caps as a defender. Highly competent at both ends of the pitch, he would often be deployed as a striker before dropping into the back line to protect a lead.

Abidin Hassan spent his club career flitting back and forth between his hoemtown club Salangor and Pahang, both of the Malaysian top-flight, and scored an impressive 193 goals in 367 in league appearances for both.

Joint with sixth-placed Hussein Saeed in terms of goals, Abidin Hassan is ranked one notch lower due to playing one extra game for his nation.

Saeed is unsurprisingly hailed as Iraq's greatest player of the century, having scored for fun and racked up a record number of caps for his country.

The striker, a one-club man who played for Al-Talaba his entire career, enjoyed a particularly prolific 1984 for his country by helping them to the 1984 Gulf Cup of Nations. There, he struck braces against hosts Oman and Kuwait, plus a hat-trick to sink Saudi Arabia.

He retired in 1990, aged 32, following Iraq's withdrawal from that year's Gulf Cup competition... because of the refereeing. The big sulks.

Remember in 2012, when everyone thought Lionel Messi had broken Gerd Muller’s record for the number of goals scored in a calendar year? Then along comes the Zambian FA and tells us that one of their guys, Godfrey Chitalu, netted 107 goals in 1972? The same year as Muller scored his 85?

Yeah, that. Chitalu also scored 79 goals in 108 games for Zambia between 1968 and 1980. His finest hour came at the 1980 Moscow Olympics, where he bagged against Venezuela and the Soviet Union.

Tragically in April 1993, while managing the national team, Chitalu was killed in a plane crash off the coast of Gabon along with his players and coaching staff.

Japan’s first footballing superstar, Kamamoto scored 84 goals in 80 internationals between 1964 and 1977. He was top scorer at the 1968 Mexico Olympics, including a hat-trick against Nigeria and two against France in the quarter-finals.

Japan came third and had high hopes of qualifying for the 1970 World Cup, but in 1969, Kamamoto was struck down with Hepatitis and in the first round of qualifying his team lost to both Australia and South Korea.

He returned the following year and soon started banging them in again. His best year was 1972, with 15 goals in eight games. After retiring, he went into politics and football administration.

Between 1945 and 1956, the ‘Galloping Major’ (Puskas played for Hungarian army club Budapest Honved, and all the players were given military ranks) scored 84 goals in 85 games for Hungary, which included three hat-tricks and four in a 12-0 win against Albania.

He got three in Hungary’s first two games at the 1954 World Cup before being carried off injured with a hairline fracture in his ankle. Puskas missed two games, came back for the final against West Germany and scored as Hungary's opponents came back to win after shipping two in the first eight minutes.

Slowly but surely, Cristiano has been chipping away at this list. In March 2017 there were 11 men ahead of him after he levelled Stern John's (!) haul of 70 for Trinidad & Tobago. Now there's only one, having surpassed Ferenc Puskas during Portugal's 2018 World Cup tussle with Morocco.

He'd matched the Hungarian's lot with a stunning hat-trick goal against Spain in the opening game, salvaging a last-gasp draw for the Seleção. Ron has always been a clutch player for his country, though – most memorably when his second-leg World Cup 2014 play-off hat-trick against Sweden sent Portugal through in a thrilling encounter. Only Robert Lewandowski netted more times in 2018 qualification, and he failed to score in only two games.

Now just 10 goals off the top spot, and still banging them in with insane regularity for club and country, Ali Daei: he's coming for you...

When Hertha Berlin beat Chelsea 2-1 in a 1999 Champions League group game, it was the most prolific international goalscorer of them all who rose above Frank Leboeuf to head the Germans in front. Iranian striker Ali Daei then robbed the Frenchman inside Chelsea's half before making it 2-0.

Daei didn’t fare as well against tougher opposition, and failed to score in the 1998 and 2006 World Cup finals. He did, however, set up the goal that beat the USA in 1998 to give Iran its first – and to date only – World Cup finals victory.

SEE ALSO USA vs Iran at France '98: the most politically charged game in World Cup history