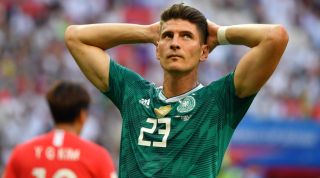 The Group D winners didn’t even get out of second gear in beating Nigeria 2-0, took a wrecking ball to Argentina in a fiesty 3-0 win, then – even with the group won – beat Iceland to complete a perfect round. Luka Modric has been imperious. Now watch them lose to Denmark.

Top scorers in the group stage, besting powerhouses Panama and Tunisia before their second-string side beat England’s reserves 1-0. Eden Hazard and Romelu Lukaku have starred, but this team probably has even more to give in attack.

In three words: Getting ominously better

Struggled past Egypt and Saudi Arabia but achieved a maximum nine points by beating Russia 3-0. Three clean sheets shows their defensive solidity, while manager Oscar Tabarez seemed to find a better midfield balance against Russia. The strikers aren’t bad either.

In three words: Slick but shaky

In three words: Coutinho over Neymar

Without ever hitting top gear, still earned seven points from nine and conceded just one goal as they eased to the top of Group E. Coutinho has been the match-winner in all three games having put in a crafty, early shout for Golden Ball honours.

Let’s ignore the Belgium game, as it was essentially a reserve team friendly. England’s first-choice XI played some superb stuff in the first two matches... albeit against two of the worst teams in the tournament. Basically, we’ll know a lot more after the Colombia game.

In three words: The last laughers

The ultimate overachievers. Saw off South Korea in a snoozefest, experienced heartbreak in losing 2-1 to Germany and then showed their big Swedish (meat)balls by bouncing back to trounce Mexico 3-0 and finish atop Group F. Where did Germany come again?

Next: vs Switzerland (July 3)

In three words: Great on paper…

Roared out of the blocks to cut open Germany, then beat South Korea easily. Against Sweden, needing just a point, El Tri seemed to get stuck on how to play – and fell apart. Can they rediscover their counter-attacking verve for the knockout round?

In three words: Jekyll and Hyde

Hindered by an early red card/penalty in their shock defeat to Japan, but looked back to their 2014 best in slicing open a hapless Polish defence. Then struggled past Senegal, not helped by James Rodriguez’s early injury. Inconsistent but still a danger in attack.

In three words: Not so neutral

For a team that regularly stink it up at major tournaments, the Swiss have shown real attacking flair. Failed to keep a clean sheet so far, but fired back to beat Serbia with two cracking goals. That one win sees them into the last 16 (where they will draw 0-0).

In three words: Get your goat

Portugal can be frustrating. They contributed to the best game of the tournament in a 3-3 with Spain, but have since underwhelmed in grinding out four points against Morocco and Iran, the latter coming close to knocking them out. Still, the No.7 looks decent. Who is he?

In three words: Not actually crap!

We were told that this was the worst host nation since the dawn of time, so it's some surprise that Russia can play football. Denis Cheryshev and Aleksandr Golovin have looked classy, and while the 3-0 loss to Uruguay was a reality check, these lads have avoided humiliation and/or a stint in the Gulag. Superb.

A pleasing surprise package in their first two games, this unheralded squad beating Colombia then drawing 2-2 with Senegal in an entertaining match. Less said about the 1-0 loss to Poland, the better. Please remember to start Takashi Inui in the knockout round.

In three words: Not mellow yellow

The best-performing side to be heading home. Beat Poland, led 1-0 and 2-1 before drawing with Japan, then just couldn’t get the goal or point they needed in an incredibly tight game with Colombia. Ludicrously, went out on bookings; even Scotland have never managed that one.

Before the tournament, we were told that Denmark were largely Christian Eriksen dependent. That might have been underselling it. He’s provided the strike and an assist for the Danes' only two goals. That 0-0 with France was an abomination even he couldn’t save.

Oh, Peru. They should have beaten Denmark (but lost 1-0) and taken something from their game against France (but lost 1-0). Out after two games despite playing some lovely, slick football. At least their raucous fans got to enjoy a 2-0 win over Australia.

In three words: All very messy

Stumbled through with all the composure Diego Maradona has showed in the stands. A piece of Leo Messi brilliance and a late Marcos Rojo goal saw them pip Nigeria, but a 3-0 loss to Croatia is telling. Javier Mascherano is 34 years old but looks twice that.

Simply didn’t turn up against Croatia but Ahmed Musa morphed into Brazilian Ronaldo for 45 minutes against Iceland. Could have beaten Argentina if Odion Ighalo had packed his shooting boots for Russia, but Nigeria’s defence just couldn’t see the game out.

In three words: So very near

Two slices of luck in the form of a 95th-minute own goal by Aziz Bouhaddouz vs Morocco and a dubious VAR penalty against Portugal. But Iran earned it with their industry, pushing Spain and the Portuguese so close. A Mehdi Taremi shot away from qualifying.

In three words: Probably quite angry

Will feel justifiably aggrieved that Aleksandar Mitrovic didn’t get a penalty against Switzerland. Being caught pressing forward at the end of that game cost Serbia dear, with Xherdan Shaqiri’s late strike meaning they had to beat Brazil to stay in. They couldn’t.

In three words: Thank you x

Not great in that they deservedly lost to Sweden and Mexico in their first two fixtures. Yet rousing themselves for that stunning 2-0 victory over Germany, even as they knew the result in the other game was going against them, is one of the World Cup’s enduring memories.

In three words: The ultimate frustration

How did they finish with just one point? Easily the best side to finish this World Cup without a win, Morocco contrived to lose to Iran and Portugal despite at least equalling both sides, then led twice against Spain before drawing. Dynamic in attack but not enough end product.

Just one point but (did you know this? Because it was was widely unreported) the smallest nation every to appear at a World Cup can feel proud. They froze out Messi, and played to their strengths in losing narrowly to Nigeria and Croatia. Might melt in Qatar, mind you.

Let’s give Toni Kroos credit: that free-kick against Sweden was an incredible showing of nerve and skill. Isn’t it a shame that win was surrounded by Germany looking blunt in attack and inept in defence against Mexico and South Korea? It isn’t? Oh. Carry on then.

You have to give the Socceroos credit: they came with a gameplan: i.e. have Jedinak score a penalty in every game all the way up until the final. Australia actually showed plenty of grit and never looked overwhelmed at any point, but a lack of real quality was their undoing.

In three words: Up the Khazri

Looked all over the place defensively in the first half hour against England, then decided to cunningly expand that gameplan to 90 minutes against Belgium. Scored five goals, though – and beat a useless Panama, with Wahbi Khazri netting twice and assisting two more.

In three words: The bad seeds

Avoided becoming the first seeded team in World Cup history to lose all three games by beating Japan when they were already out, but Poland looked poor, particularly in the 3-0 loss to Colombia. Who was that No.9 and what did he do with the real Robert Lewandowski?

In three words: Los Ticked off

A fall to earth after the highs of 2014. Came so close to frustrating Brazil before two injury-time goals but didn’t show any ambition in their opener against Serbia until they were a goal down. At least a late, own-goal penalty earned them a point against Switzerland.

In three words: The unlikely lads

Well, they won a game. That isn’t something we thought we’d be saying after their defenders gave it the full clown, circus and trapeze act in that 5-0 loss to Russia. Yet even that win came in a dead rubber against Egypt, thanks to a baffling VAR penalty. They all count, lads!

If you’re a one-man team – and that one man is injured – you have a problem. A half-fit Mo Salah still somehow scored twice, while 45-year-old Essam El-Hadary’s genuinely incredible penalty save was a must-see moment. But zero points from the tournament’s weakest group? Oh dear.

A bit like the first level of an old-school video game – think Streets of Rage – in that the hapless opponents are easily defeated but programmed to continually shuffle forward and punch you in the face. Lost three, conceded 11, but brought the passion, man. Come back in four years!