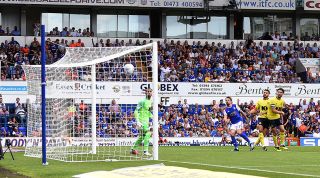 Blackburn have resumed life in the Championship with a pair of back-to-back draws against Ipswich and Millwall respectively. Tony Mowbray has kept faith with many of the players who won promotion from League One, but also made a handful of youthful additions to complement his existing squad.

Jacob Davenport might have to bide his time, but the 19-year-old midfielder – who can also fill in at full-back – has a bright future ahead of him. He progressed through the ranks at Manchester City but found his path to the first team blocked by a wealth of outstanding senior players.

Half a season on loan with Burton prepared him for the demands of competitive football and playing under pressure. Building on that experience, Davenport – who has previously represented England at U18 level – moved to Ewood Park for a nominal fee this summer.

It was a deal that seemed to rumble on in the background all summer, but wasn’t actually completed until three days before the transfer window closed. West Brom swapped Salomon Rondon for Newcastle’s Gayle, both moving on loan for the season. The arrangement seems to suit all parties and gives Darren Moore the prolific striker he’s been searching for.

In recent years, Gayle has almost become the quintessential example of a goalscorer struggling to bridge the gap between Championship and Premier League. He scored 23 times in 32 appearances during Newcastle’s promotion season, but is seemingly too limited to make a serious impression at the very top – as his record of a goal every 223 minutes in the top flight suggests.

That won’t be of any concern to West Brom, however, as long his pace and sharp shooting do the trick from now until May.

Among the few positives in another traumatic season for Sunderland were the opportunities granted to a clutch of promising young players. With more established figures failing to perform, Chris Coleman explored other options including Josh Maja and Joel Asoro.

The latter, a Swedish youth international of Ghanaian descent, became Graham Potter’s first major signing for Swansea last month. Asoro is an explosive and tricky winger who has been watched by some of Europe’s biggest clubs, and his arrival is in keeping with an emphasis on brave, attacking football that was lost towards the end of Swansea’s stay in the Premier League.

Left-back had long been a problem position for Birmingham. Although Jonathan Grounds had given the club good service over a number of years, particularly considering he joined on a free transfer from Oldham during a period of self-imposed austerity, he was never sufficiently dynamic or capable on the ball to offer an attacking threat.

And so arrived Kristian Pedersen, a £2.5 million signing from Union Berlin. Due to Birmingham’s transfer embargo, his registration was only completed shortly before the opening game of the season, a spirited 2-2 draw with Norwich.

There were a couple of moments of suspect positioning, but the 24-year-old Dane pushed forward well and delivered some dangerous set-pieces. He will be an automatic selection for Garry Monk.

Having managed to cling on to Aden Flint last summer, despite numerous tempting offers, it was always unlikely that he would remain with Bristol City after another season that brought plenty of goals and big contributions. So after the stopper was sold to Middlesbrough for £7m, manager Lee Johnson acted quickly to secure Ipswich’s Adam Webster as his replacement.

Webster is six years younger and substantially cheaper than the departing Flint, and it looks like the Robins might well have got the better end of the deal. He’s more comfortable in possession and when playing the ball out from the back, and is a necessary and timely replacement.

The 23-year-old might not score as many headers from set-pieces as Flint did, but he’ll have an appreciable influence on how Bristol City play.

Preston tend to fly under the radar in a division filled with former Premier League clubs – but that’s no bad thing as they aim to go about their business efficiently, and they could again be dark horses to make the play-offs. Alex Neil has built on the foundations laid by Simon Grayson and introduced a little more adventure at Deepdale, resulting in a seventh-place finish last season.

The Lilywhites’ transfer business has been similarly low-key, with little money spent on signings who are far from household names. Andrew Hughes (from Peterborough) has started their first two matches, while Ryan Ledson made his debut off the bench on the opening day.

The busy midfielder, formerly of Everton, arrived from Oxford for an undisclosed fee believed to be around £1m. He’s still only 20, was previously shortlisted for the EFL Young Player of the Year award, and has plenty of scope to improve further.

Reading may well endure another season of struggle but at least acted quickly to pinch Yiadom ahead of several other interested clubs. After being released by Watford at the end of his apprenticeship, the right-back dropped down to non-league with Hayes & Yeading and Braintree, before earning a move to Barnsley two years ago. Quick, athletic and forward-thinking, the 26-year-old was in demand last summer but waited until his contract ran out to leave on a free transfer.

Paul Clement, then in charge of Swansea, was particularly keen on the Ghana international and continued to monitor his situation closely. The pair have finally been united at Reading, and Royals supporters are now hoping that Yiadom can stake his claim for the right-back spot with Chris Gunter out injured. The longstanding incumbent will have a fight on his hands to oust the new signing.

Aside from Steve McClaren taking over as manager, Loftus Road hasn’t been a particularly busy place this summer – just one arrival, several players released and the departure of goalkeeper Alex Smithies. It’s a stark change from the frantic transfer activity sanctioned by owner Tony Fernandes in previous windows, but might be what the club needs to regain a sense of stability.

The solitary signing is Union Berlin’s Leistner, a hulking central defender who arrived on a free after his contract expired in Germany. Tall, powerful and a natural leader, he was immediately instated as the club’s captain by McClaren.

Leistner promises to bring authority and order to an often-chaotic QPR backline that suffered one of the division’s worst defensive records last season, conceding 70 goals. Supporters hope he will make a significant difference.

The relationship between Mick McCarthy and Ipswich fans grew increasingly hostile over time, culminating in the ex-Ireland boss’s April departure. Change was needed for the good of the club, and Paul Hurst’s appointment has provided a much-needed injection of optimism at Portman Road. Sure enough, he’s been quick to address some enduring deficiencies in the Tractor Boys’ squad.

Ipswich have lacked pace and threat in behind, and a few of Hurst’s lower-league signings look to have filled the void – none more so than Gwion Edwards. The Welshman’s natural talent has never been in doubt, and after a few years of rebuilding his career at Crawley and Peterborough, the 25-year-old is desperate to show what he can do in the Championship.

An excellent debut against Blackburn, featuring a goal, an assist and some devastating dribbles, made for the perfect start.

Ranked! Every Premier League manager by their job security

In their eagerness to return to the Premier League as soon as possible, Aston Villa have sometimes been guilty of overspending on the wrong kind of players – Ross McCormack and Scott Hogan being particularly expensive cases in point. In straitened circumstances they’re being forced to think harder, and have made a clever and progressive signing in Hibernian’s McGinn.

The Scotland international is a bright and purposeful player who will inject energy into a somewhat-stale Villa midfield. He has a superb range of passing, and Steve Bruce did well to sign him from under Celtic’s nose.

McGinn helped to revive Hibs’s fortunes and re-establish the club in the Scottish Premiership, becoming a fan favourite along the way. He left with their fans’ best wishes and could turn out to be a real coup for Villa.