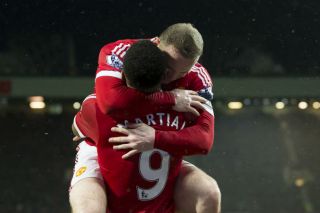 Louis van Gaal set up his Manchester United side in a 4-2-3-1 with Anthony Martial on the left, Juan Mata on the right and Ander Herrera occupying the space behind Wayne Rooney. However, with Swansea City playing a hybrid of a 4-3-3/4-4-2 (diamond), the Dutchman quickly responded inside the opening few minutes and switched to three at the back. This meant that United’s formation moved to a 3-5-1-1, with Ashley Young moving up the field to a wing-back role, Herrera dropped into midfield and Mata taking up the No.10 position.

Both midfields were effectively diamonds, with each player within the vicinity man-marked. United were pedestrian and slow in possession once again, which ensured that their build-up play was routine and fairly obvious. Van Gaal described the system as “risky” because of the space that was left at the back. Their only real threat in the first half came from Young’s running on the right, with the wide-man able to break the deadlock straight after the restart by crossing for Martial to head down and into the goal.

The introduction of Modou Barrow after an hour saw Andre Ayew become a lone striker and Swansea change to a 4-2-3-1. In response United became 4-4-1-1 with half-time substitute Matteo Darmian taking up the left-back slot.

Icelandic international Gylfi Sigurdsson was tasked with playing as a cross between a No.10 and a false nine, depending on Swansea’s position with the ball. When he was deeper at the tip of the diamond, it was Morgan Schneiderlin that had to keep a watchful eye on the attacker; Chris Smalling took over the duties when the Swansea man ventured a little further forward.

“We started off with a diamond, with Gylfi at the tip of that and he has got the ability create and score goals,” caretaker Swansea manager Alan Curtis told FFT after the game. “In terms of set-pieces as well, he’s very important to the way that we play. I’m delighted he got the goal, he has obviously not scored as many goals this season as last, but you can see the qualities he has.”

Sigurdsson caused Schneiderlin problems at times, although he was unable to get a run on Smalling and looked a little unaccustomed to the job that was asked of him. His equalising goal came when he had a striker ahead of him and he was able to make late runs into the box.

Substitute Barrow found the forward after some impressive lateral movement across the box from Sigurdsson and the former Tottenham Hotspur midfielder was able to bend his neck to generate an extreme amount of power for the header given the position.

It’s still arguable that Ashley Young isn’t a full-back, but the former Aston Villa forward has certainly improved his defensive discipline and positional sense since arriving at Old Trafford. As the right wing-back, he was United’s biggest threat as he aimed to pin back Swansea left-back Neil Taylor.

He created four chances in the game, the most by any player on the pitch, with all four coming from crosses. In the 41st minute his nutmeg on Taylor took him to the bye-line, as he cut the ball back into the path of Mata. The Spaniard couldn’t get any power in his shot and it was comfortably held by Lukasz Fabianski. Then, a couple of minutes later his ball into the box was headed by Rooney and once again the Swansea goalkeeper was equal to it.

His assist just after half-time for the opening goal confirmed his attacking presence, although Swansea will be disappointed that he was forced to defend very little on that flank. Van Gaal confessed that he replaced him for Patrick McNair with 12 minutes to go because Young has played a lot recently.

The England forward worked hard throughout and his movement was very intelligent, even though his teammates couldn’t always find him. “I’m always demanding running to the first post and he created the gap for Martial,” said Van Gaal in the post-match press conference, as he explained the importance of the striker’s act for the Frenchman’s goal.

Rooney got his own reward for his unselfish play in the 77th minute after Martial laid it across for him and he expertly flicked it into the back of the net. It was his first goal for two months, which took him ahead of Denis Law in the all-time scoring chart for the club and on his own into second place.

“He scores a fantastic goal with his left foot behind his right foot, you cannot imagine to score a goal like that,” concluded Van Gaal.

Although there was a sense of relief for home supporters enjoying their first win for nine games, it could easily have been a different story. When Rooney scored what became the winning goal, Van Gaal was in the process of substituting Young for McNair; there would have been a very different feel around the ground had the scoreline still been 1-1 when the Northern Irish defender entered proceedings.

Despite Rooney’s goal, the away side rallied late on and it was perfectly natural for United to show signs of nervousness given their recent record. Ashley Williams stung David De Gea’s palms in stoppage-time, then Lukasz Fabianski came up for a corner and was extremely unlucky not to score with a free header in the final opportunity of the game. It would have been a dramatic climax to the match and the keeper’s reaction at the final whistle indicated that he felt he should have done better.

“We had a corner just beforehand and Lukasz wanted to go for it, but I told him to hang back,” admitted Curtis. “I wish I’d told him to stay up now!”