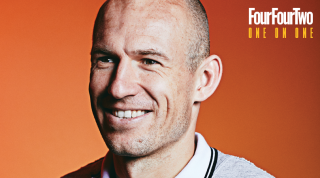 The Dutch wing wizard completed a £12 million switch to Stamford Bridge in the summer of 2004 and won back-to-back Premier League titles with the west Londoners under Jose Mourinho.

Robben had been a long-time target of the Red Devils before swapping PSV for the Blues, even taking a tour of the United training ground and dining out with the manager in Manchester.

An offer failed to materialise, though, allowing Chelsea to swoop in. But Robben says he wouldn’t have needed a second invitation to sign for Ferguson’s side had the opportunity presented itself.

Speaking exclusively in the May 2018 issue of FourFourTwo magazine, out now, he reveals: “I had a very good conversation with [Ferguson] over dinner in Manchester and we spoke about football and life. I also went and had a good look around the training ground and everything was good.

“But after I went back to PSV nothing happened. There was no real contact and the deal didn’t happen. PSV were also negotiating with Chelsea at that time, so maybe they offered PSV more money? I don’t really know.

“I spoke to Chelsea and I liked their plans. We had one meeting and everything was done pretty quickly. Had Manchester United offered me a deal straight after I met them, I would have signed there, but it didn’t happen and I’ve got no regrets.”

Robben also collected FA Cup and League Cup winner’s medals in a Chelsea career hampered by injuries, causing an uneasy relationship with his boss. Yet the 34-year-old says the Special One had a positive impact on his game and gave him the confidence required to shine at the highest level.

“He was really demanding and intense, but at that age I think it was good for me and my football development,” says Robben. “I am a student and someone who wants to improve and work hard, so I think our personalities were a good fit. Mourinho was a good man-manager and he gave me a lot of confidence.

“For a manager, it’s difficult if a player is injured because you can’t count on him, so I could understand it a little bit. But it’s worse for a player – you want to be enjoying your football. Jose is a winner and wants strong players. I felt so much confidence from him when I was fit, but injuries created a bit of a struggle.”

Read the full interview with Arjen Robben in the May 2018 issue of FourFourTwo magazine. A World Cup icons special, we hail the heroes and headline moments from all 20 tournaments since 1930, and hear from Brazil legend Ronaldo about how he turned his France 98 heartbreak into Golden Boot glory four years later. Plus, Henrikh Mkhitaryan tells us how he plans to write his name in Arsenal history, 1860 Munich fans reveal why they are loving life back at their old ground in the German fourth tier, and we run down the top 50 players in the Football League. Order a copy today, then become a subscriber!