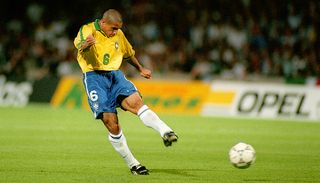 Roberto Carlos is thinking. Hard. The legendary left-back scored two of the most memorable goals in history – a banana free-kick against France and ‘El Gol Impossible’ for Real Madrid against Tenerife, whacked home basically from the corner flag – and FFT wants to know which is better.

“It’s got to the be the free-kick against France,” ht eventually responds, that trademark smile enveloping his face. “That was more spectacular, even if the goal against Tenerife was more difficult.”

It’s a goal that could only have been scored by a Brazilian. Struck from fully 40 yards out, the ball’s improbable arc around the wrong side of the French wall swerved inside Fabien Barthez’s left-hand post having set off going 10 yards wide. Yes, it was only Le Tournoi – a World Cup warm-up unfathomably won by England – but it matters not.

“I always struck set-pieces on the valve because that’s the hardest part of the ball and you get more power,” Carlos explains, picking up a nearby ball and acting out his thought process (watch the goal again and you can see him carefully placing the ball beforehand). “I always kicked the ball from its bottom-left to the top-right, which helped it swerve.

“I’ll always remember the advertising behind the goal. I was aiming for the ‘A’ in La Poste, but when I hit the shot it was miles away from that – going towards a different advert! The ball boy was diving out of the way of the shot, too. He should have had more confidence in me!”

But there’s one unexpected element of the goal, even to Carlos. “One thing that really surprised me was the spin on the ball. After it grazes the post, the spin changes direction. Watch it again and you’ll see.

“Goals like that come around only once in your career. I hit a few like that in training, with and without a wall, but never with as much swerve and spin. It was a beautiful goal – unforgettable.”

This interview originally featured in the April 2014 edition of FourFourTwo magazine. Subscribe!