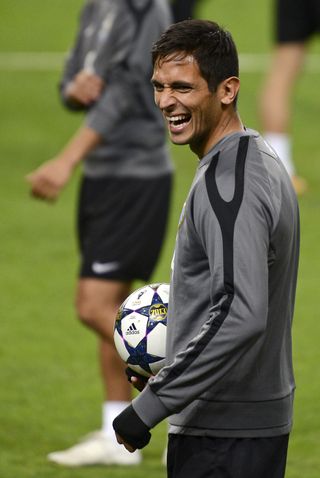 Hi Roque. Surreally, we’re doing this interview in the Rovers Return on Coronation Street. Be honest: have you ever sat through a whole depressing episode of Corrie?
Hi. I’ve never seen it. I’m learning a bit more about it today. But every dressing room I’ve ever been in, they talk about Coronation Street and what’s happening. Micah Richards and Shay Given were always on about it.

You’ve seen the actual street now, so tell us: if you weren’t a footballer, would you rather work in The Kabin as a newsagent, at Websters Auto Centre as a mechanic or at Audrey’s Salon, doing the old ladies’ hair?
Er... I think The Kabin. I’m not so good with my hands, cutting people’s hair or fixing stuff. Maybe I would be a good newsagent.

Shame – you’d have been popular with the Weatherfield pensioners at Audrey’s.
I’ll be a newsagent. I could sell the sweets and chocolate.

Magic. There’s a famous photo of you and your wife holding a massive golden cup. Do you drink out of such mighty goblets at the dinner table at home?
I’ve not seen this photo. In Paraguay, many people have special silver cups which we take our national drink from. But we just have normal cups at our house.

Do you eat dinner off the Charity Shield?
No, no, just normal plates.

Let’s do a test to see how northern you’ve become living in Lancashire. Do you eat hotpot?
Yes! I like it! The chef Simon at Blackburn has made it for me. I’ve had black pudding and Sunday lunch, too. And bitter, I quite like.

Chips and mushy peas?
No.

Pork scratchings?
What are they?

Scotch eggs?
I’ve not heard of this.

Chicken in a basket, seeing as Blackburn are owned by Venky’s?
We’ll have to see after the next match. Maybe.

It’s a funny concept, eating out of a basket. Would you eat an otter out of a crib?
[Confused] No, no...

Let’s move on. Is it true that at Manchester City, Steven Ireland bought a flange of baboons on a whim?
[Chuckling] I have not heard this. He bought some monkeys? You know what, I wouldn’t be so surprised. He’s got a big house, so if he can take care of them, why not?

Indeed. Your name includes the names of two of the world’s greatest fictional men: Rocky and Santa. Which would you rather be?
I’ll be Balboa! I’ve taken a lot of hits, just like him. I have been Santa in the past. We have Santa in Paraguay, just like England, so I have dressed up in the red suit and done all that. But I’ve never been Rocky. That would be fun.

Your name is an anagram of Equator Sun Czar. If you were an all-powerful deity, what would you change about the world?
Oh, I would end hunger across the world. I would sort out places like Africa.

Venky’s for everyone!
That would be a great thing to do, yes.

Word. Now, the snood’s big this year, but what’s next in the crazy world of footballer fashion??
It’s hard to say. Who knows what will come in the future? I have tried the snood in training, because it has been very cold this winter. But I find them a bit annoying.

Is it true that Steven Ireland tried to get Manchester City to wear 16th century ruffs?
I don’t think so.

Finally, if you had to take a penalty in order to save a kitten from execution, would you go for power, placement, or both?
To do what?�rong>

Save a kitten. Score the penalty, or Tiddles gets a bullet in his fluffy little head.
I would mainly go for placement, and pick my spot. But you’ve got to hit it with enough power, too. So I guess a real mixture. I’m pretty confident with my penalties.

It sounds like our beloved pet is in good hands.
I will score for him. Your animal is safe, I hope!

Good times, Roque. Thanks for chatting!
Thank you!

Interview: Nick Moore. From the March 2011 issue of FourFourTwo.