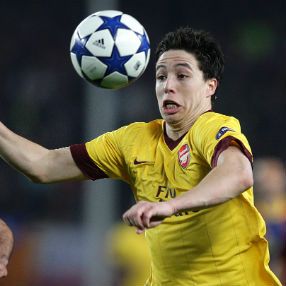 Samir Nasri, Manchester City's flamboyant midfielder, talks to FourFourTwo in March 2011 when he was at Arsenal about Maradona, Zidane and his own ambitions – not to mention his love of White Hart Lane...

“Coupez!” shouts the director after ?what must be the 20th take, and the ?crew spontaneously break into a round ?of applause. We’re in one of the function rooms at Meadow Park, home ground ?of Boreham Wood FC, on a cold, grey January afternoon – and it feels like ?the entire French advert-making ?industry has turned up for the day.

Star of the show is Samir Nasri, and if the playmaker keeps playing like he has so far this season invitations to publicity shoots such as these will become more and ?more frequent. He’s surprisingly relaxed after spending an hour or so throwing ?a luminous football boot at an imaginary target. Grinning from ear to ear in his stockinged feet, the 23-year-old Arsenal and France star happily poses with the ?crew for a team photograph.

Once the filming is over, he seems genuinely excited to sit down with FourFourTwo for the first time. “I don’t do much with the English press,” he says in French as he makes himself comfortable, although his English is improving. We mutter something about the dangers of swimming in tabloid-shark-infested waters. He laughs: “Ah, but FourFourTwo is more classy, right?” Taste as well as talent. This boy’s got a very bright future.

How do you explain your sparkling ?form this season?
I was able to have a good break last summer and completely clear my head. It was the first time I managed to get away and have such a long break. I came back like a newborn baby!

You’re scoring a lot more goals now. Was this something you specifically worked on before the season began?
Not really. When I played for France at youth level I always scored lots of goals. ?I’m playing higher up the field these days, almost like an attacker. It means I get behind the defenders a lot more and find myself in a lot more one-on-one situations.

Did missing out on France’s World Cup squad act as an added motivation going into the new season?
I was certainly motivated to prove the coach was wrong to leave me out. It was a blow at the time, but long term, I think it was a good thing for me to miss the tournament. It allowed me to get away on holiday and have a proper break, and when I came back I was hugely motivated. Also, I knew a new coach was taking over at France so it was a chance for a new start.

It must have been nice to win France Football’s Player of the Year award for 2010, though?
I was proud of it because players – the former winners of the trophy – vote for the prize. It ?was a form of revenge, too, because I’d missed the World Cup. That counted for a lot.

Speaking of players, who were your idols growing up?
Maradona – even though I was born t�he year after he won the World Cup. My father loved him, and I had video tapes of him in action. I watched his games from 1986 over and over again. I absolutely loved him. For ?me, he was the best. He was one of my main inspirations to become a footballer.

Growing up you were a Marseille fan. ?Who were your idols among their players?
The big names when I was really young were Jean-Pierre Papin and Chris Waddle. I loved Waddle. He was a magician. Since moving to England I haven’t met him, although I guess he’s more of a Tottenham supporter! [Laughs] But when I was a kid in Marseille he was magic.

Is it true you were a ball boy at Marseille?
Yes, I was. It came about because I was in the Marseille youth academy and some of the lads from there used to be ball boys. I was a ball boy when Robert Pires was playing for Marseille. I did an interview for L’Equipe magazine once, and they dug out this picture of me when I was a ball boy around the age 10 or something. There was this tiny figure on the touchline. [Laughs] It’s funny, you know: I was a ball boy for this match against Real Madrid at Stade Velodrome. Six months later, I was playing in the Marseille first team! [Laughs] Things went pretty quickly for me.

Tell us about the atmosphere growing up in Marseille and the love the people have for their local team...
If you’re born in Marseille, you’re obliged to be a Marseille fan. It’s a religion. The city lives and dies by the team’s results. If the team loses, the city’s in mourning; if the team wins, the city is a happy place to be. That’s how it is. It’s totally different to London. Here, you’ve got Tottenham, Fulham, Chelsea, Arsenal, QPR… ?there are so many clubs. At Marseille, you’ve the one club, and that club is the focus of everything in the city.

How does the pressure for success at Marseille compare with English football?
You can’t compare Marseille to an English club because things work differently over there. Once you’ve played for Marseille, you can play anywhere, because it prepares you for anything. You’ve got media pressure, pressure from the fans. And the club works differently. At times, after Marseille games, the president and director of football would come into the dressing room to speak to you. That just doesn’t happen in England. The only time you see the Arsenal chairman is if he wants to shake your hand. ?At Arsenal you’ve got a manager, Arsene Wenger, who’s in charge of the team. There just isn’t the same pressure on you at Arsenal. Over there, you have all these meetings, the fans waiting around after training to tell you what they think, and so on. Ask Robert Pires what it’s like – at Marseille, fans smashed up ?his car at the training ground!

Have you found an atmosphere in England that compares with Marseille?
I probably shouldn’t say this, but the atmosphere at White Hart Lane is very, ?very good. And the crowd was tremendous for our FA Cup replay at Elland Road. Anfield is quite something as well. They’re all compact stadiums where the fans are close to the ?pitch. They generate a fantastic noise.

What was it like to be called ‘the new Zidane’ while playing at Marseille?
It drove me mad. When you’re 17 years old, ?you don’t play well every week. You can ?imagine what it was like to be compared to the best player the world has seen in recent years. All players are different. I’m sure if another young player comes along and they compare him to Zinedine Zidane, it will drive him mad as well. It was very, very flattering, of course, but ?it came far too early in my career.

But nevertheless Zizou must have been ?an inspiration to you?
Absolutely. First of all, as a man he’s an inspiring figure. I’ve been lucky enough to meet him several times and we’ve got things in common because we grew up in areas pretty close to each other in Marseille. He’s a super guy. As a player, he’s an idol and you can’t ?help but be flattered when you’re compared ?to someone like him.

At what point in time did you start to ?think you might actually make it as ?a professional footballer?
I wanted to be a footballer from a very early age and I joined the Marseille youth ranks, but at 10 or 11 I was too small. I only really started to believe I might make it as a professional player when I got called up to the French national youth teams at the age of 15. Before that, I seriously wasn’t sure whether I’d make it as a footballer. I wanted to, of course, but I kept working hard at school, because you can always pick up an injury or something like that and suddenly everything changes. Luck is also a big factor when you’re a young player. ?I was fortunate enough to have good people around me at the time.

Was playing in England an ambition?
To be honest I didn’t have a career plan. I broke into the Marseille first team and I knew if things went well eventually it might be the right time to move on to something else. When you move abroad at the age of 20, you have to make sure you’re going to the right set-up to give yourself the best chance of succeeding. The fact Arsenal have a French manager obviously helps, because at 20 you’re not a man yet. When playing for Marseille, I always lived with my parents. I moved to Arsenal and all of a sudden I was on my own in a foreign country. The fact the manager here and a lot of the players were French played a big role in my decision. I could have gone to other big European clubs but I’ve never regretted my decision.

Certain sections of the media criticised you before this season for what they saw as a lack of consistency. What’s your verdict on your time so far at Arsenal?
When you arrive from Ligue 1, you can’t adapt to the Premier League within the first six months. There are bound to be ups and downs along the way because the games are so intense and the fixture list is so heavy. And in France, you have a winter break in December. In the end, those sort of issues catch up with you.

Are you surprised how ?open the league title race ?is this season?
It doesn’t surprise me at all. ?It’s a very open race, although saying that, a small gap has opened up between the top sides and the rest of the division.

What has happened at Arsenal this season? Why ?do you think the team looks ?better equipped to win the Premier League?
I’d say we’ve grown up. We’ve realised what we need to do. I think we’ve matured in terms of our style of play. ?By beating Chelsea I think we showed we now know what it takes to challenge for the title.

Interview: James Eastham. From the March 2011 issue of FourFourTwo. Subscribe!