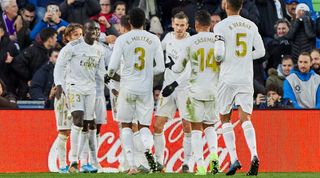 Last night, Real Madrid cantered past Valencia in the first semi-final of the Spanish Super Cup, winning 3-1 to qualify for Sunday's final against the winner of tonight's game between Barcelona and Atletico Madrid. The format is new this year. Previously a two-legged affair between the La Liga champions and the winners of the Copa del Rey and generally contested at the beginning of the domestic season, the Royal Spanish Football Federation (RFEF) first broke with tradition in 2018, staging a single game between Sevilla and Barcelona played in Tangiers, Morocco.

In 2020, the Super Cup evolved further, becoming a four-team mini-tournament. It also moved even further from home, with the RSFF selling the hosting rights to Saudi Arabia.

It’s become much too easy to shut down objections to this kind of practice. Not just the moving of domestic fixtures across international borders, but also the ethical questions raised in the process. Whenever the issue of human rights is raised - as it has been in this instance, by Amnesty International, no less - there is always a disingenuous argument ready in response. Typically, it's one which pivots around the fallacy that staging events in certain territories can potentially be a catalyst for instant social improvement.

Luis Rubiales, the head of the RFEF has been the latest to use such a defence: “We had a chance to help. We’re going to be a tool of social change that benefits men and women.”

Football plays this card so insincerely and so often. On the one hand, it can stare down a camera’s lens, without blinking or smirking, and talk of its tremendous benevolence. On the other, it seems reluctant to extend that great charity to any city or country which isn’t offering a huge financial incentive.

This three-year deal with Saudi Arabia is reportedly worth £102m, which will be shared between the RFEF and the participating clubs. For Rubiales, that will make this year's edition “the Super Cup of equality.”

..and if that doesn't raise a cynical eyebrow, nothing will.

The retaliatory points generally make themselves. Seven months on from the Europa League final being held in Baku – and four months away from four European Championship fixtures also being partly staged, again, in Azerbaijan – the same concerns about sportswashing are having to be reheated and issued again. In this instance, they’ve been reported and articulated well by The Guardian’s Sid Lowe and Football365’s Dan Bridges.

What’s particularly tedious is just how dextrous the game manages to be in evading criticism. Back in June, for instance, UEFA president Aleksander Ceferin was especially crafty on the issue of Baku, turning the collective concerns about cost, travel and accommodation into a broadside against Western European arrogance. It played extremely well with the gallery. It was nonsense, of course, and missed the point entirely, but it earned him a loud round of applause and, in 2020, that's more or less the same thing.

Ultimately, you have to wonder: where are football’s lines in the sand? We know what it will do for money, but the more interesting question – at this point – is what it won’t.

That’s not written solely in reference to governing bodies, either. Recently, Arsenal’s cowering response to the Mesut Ozil issue reminded everyone that, when potentially vast revenue streams are at risk, the sport’s international and local institutions alike are very adept at playing dumb.

What did watching the Club World Cup tell us about Qatar’s World Cup preparations?

Of course, that in itself characterises a contradiction of sorts. Football has a very strange, swinging relationship with politics. When it needs the protection afforded by a quasi-sociological purpose, as this RFEF/Saudi Arabia relationship shows, it’s more than happy to describe itself as being a political force. Then, it’s a do-er, a pragmatist, the United States of Football and sport’s great nation-builder; preaching its lessons, changing lives, curing one societal ill after another.

When it encounters a moral inconvenience, however, it deftly ties its own hands behind its back, claiming impotence or neutrality. Then it’s Switzerland. Then it’s back to being a simple game, played in little parks by inconsequential people who don’t even own televisions, let alone watch and understand the news.

Those duelling identities cast the game as a very agile shapeshifter. It is either the world's great healer or just a humble game, wearing whichever costume is most convenient at the time. A FIFA President, for instance, can spend his entire career coveting a Nobel Prize, but - as part of that United Passions fantasy - sincerely believe that humanitarian crises occurring because of World Cup hosting decisions are none of football's business.

The trend that conveys is also what helps to sustain this fascination with where football might go. What, for instance, might it be pretending not to notice in 10 years’ time? Whose money will it be taking and in return for what? When insatiable lust exists in concert with the ability to reason almost anything away, the possibilities are almost endless. And, in this case, terrifying.

ANALYSIS What does Liverpool's Club World Cup victory mean for the rest of their season?