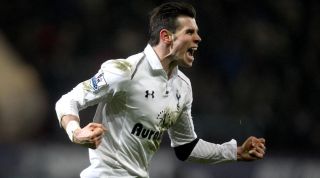 Without any more ado, let's get to it. It's time to announce the finest top-flight player...

The 2012/13 season could prove to be a breakthrough season for Bale in the way 2007/08 was for Cristiano Ronaldo, except instead of playing for a relentless title-winning juggernaut he was representing plucky outsiders battling for a top-four spot.

His breathtaking form, particularly in the second half of the season, took a Tottenham team very much in transition to within a whisker of European football's top table.

Bale racked up 21 goals and four assists in 33 Premier League matches. He had more shots on target than any other player in England's top flight (73 - one more than Luis Suarez) and attempted the fourth most dribbles (154 - only five behind second-placed Adel Taarabt).

Perhaps Bale's assist stats could be higher, but 75 chances created is not a figure to be sniffed at, and the profligacy his Tottenham team-mates can hardly be blamed on the Welshman; nor can Spurs' failure to secure a place in next season's Champions League.

That failure has intensified speculation Bale could be about to depart White Hart Lane, but it would be foolhardy to suggest fourth-place finishes alone would have been enough to keep a player of such calibre content for long. Spurs only need to peer over the fence at neighbours Arsenal to see evidence of that.

The reality is that, unless Tottenham chairman Daniel Levy strikes oil when starting work on his club's new stadium, Spurs won't be able to hold on to Bale for much longer. But should he remain in N17 for another season, Tottenham will have a good chance of not just matching this season's performance, but bettering it.

Although Tottenham fans and Real Madrid president Florentino Perez may disagree on whether Gareth Bale was born to play for the Lilywhites or los Blancos, both parties are certain to agree the Welsh fullback-turned-winger-turned-forward has developed into one of the most exciting and devastating attacking forces in world football. And so do we.

Key Stats: Bale led the 4-0 rout at Aston Villa with a hat-trick, getting 5 of his 7 shots on target. Against Liverpool, he demonstrated his versatility by playing wide on the left; he still topped Spurs' shots chart with 5 (including what turned out to be the winner) but also attempted 32 passes, created 2 chances (including a goal for Aaron Lennon), topped the take-ons (succeeding with 4 of his 9) and showed his defensive steel by contributing 8 aerial duels, 3 tackles, 3 interceptions and 4 clearances.