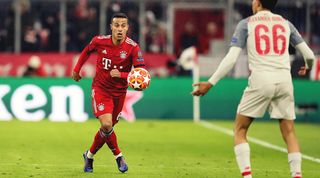 Bayern Munich have accepted that midfielder Thiago Alcantara wants to leave the Allianz Arena for English champions Liverpool, according to German website, Kicker.

Jurgen Klopp is said to admire the midfielder and would like to fit him into his plans. This would mean Klopp would have to shuffle his squad, however, before accommodating such a big signing - meaning that Naby Keita could be sacrificed.

It's not expected to be a busy summer for the Reds, who only made one deal this time last year, in the form of Adrian from West Ham United. Liverpool have been linked with a back-up left-back in recent weeks, with talk of Norwich City's Jamal Lewis and Bournemouth's Lloyd Kelly being the frontrunners.

Thiago would be the highest-profile signing that Liverpool make this summer, should the deal go through. The Reds could do with a little more creation in their midfield, given that much of the burden falls onto full-backs Trent Alexander-Arnold and Andrew Robertson, and Thiago is good at setting the tempo of a game and has an excellent passing range.

Liverpool are apparently unsure on a number of aspects of signing the Spaniard, though. At 29, Thiago is perhaps the wrong side of his peak; given his injury issues in the past couple of seasons too, he may not be the most reliable of performers.

Jurgen Klopp is also unsure as to where the midfielder would slot into his set-up. Thiago has been used to dictate the Bayern side, whether used as a single-pivot or in a midfield pair, while at Liverpool, he will be tasked more with breaking up attacks and working within a compact unit.

Should Liverpool move for Thiago, they will have to speculate to accumulate, meaning a big name could leave.

Having already lost Adam Lallana this summer on a free to Brighton & Hove Albion, it's rumoured that Naby Keita could be next out the door. Liverpool are also struggling to tie Gini Wijnaldum down to a new deal, according to reports, while Alex Oxlade-Chamberlain has underwhelmed in his time at Anfield - in part down to his injury problems.

Klopp will be mindful that losing Dejan Lovren, Lallana and Wijnaldum would be a big hit - as all three are popular leaders within the squad. With James Milner now 34 though and Jordan Henderson having struggled with a knee problem at the end of the season, a fresh face in midfield would certainly bolster Liverpool's title defence.

This may though be a saga that drags on as long as Bayern as competing in the Champions League.