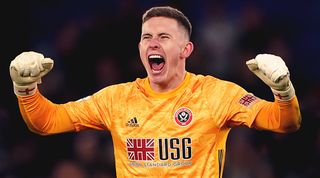 Dean Henderson has given Ole Gunnar Solskjaer a preseason headache by demanding first choice status if he is to return to Old Trafford next season, according to reports from The Sun.

Henderson believes he is at a stage in his career at which he can't afford to sit on the bench, and is not willing to play second-fiddle to David De Gea with the Euros approaching next summer. Some Manchester United supporters have called for Henderson to replace De Gea between the posts next season, with the Spaniard struggling to regain the form of recent years.

De Gea has won Manchester United's player of the year award four times, more than anyone else in the club's history, but has looked a shadow of his former self since returning from the 2018 World Cup off the back of a number of high-profile errors.

Henderson, meanwhile, has been a huge success on loan at Sheffield United over the past two years. The 23-year old kept the same number of clean sheets as De Gea last season, despite playing for a promoted club, and boasted a superior save percentage, the third highest in the whole division.

It is reported that Henderson will not countenance anything other than first choice status at his club next season, meaning Solskjaer will either have to drop De Gea or let an excellent prospect leave.

The issue is exacerbated by De Gea's lucrative contract at United. The 29-year old only signed fresh terms a year ago, a six-year deal worth almost £120m. It's unlikely, given the Spaniard's form, any other club would be willing to remove that burden from the wage bill.

Sheffield United would love to make Henderson's move permanent, but could be outbid by Chelsea. Frank Lampard has made no secret of his desire to replace the erratic Kepa Arrizabalaga.

CHELSEA 6 goalkeepers the Blues could move for this summer

While Henderson is undoubtedly a good player, he has never before played in the Champions League, where the standard is far higher. Moreover, and with all due respect, being the Manchester United No1 is a different kind of pressure than Sheffield United's comes under. Henderson might be better off seeking a further one-year loan to Chris Wilder's side and staking a claim for the England top-spot before resolving his permanent future next year.