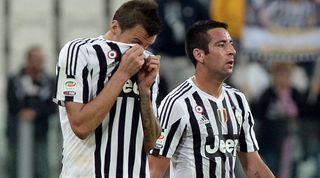 In what has been themed Year Zero for Juventus, that is exactly where they find themselves: the Serie A champions have not only begun the new campaign without Carlos Tevez, Andrea Pirlo and Arturo Vidal, but also without a single point. Consecutive defeats have left them 17th in the table – above only Empoli and promoted duo Frosinone and Carpi – marking their worst ever start to a season.

“I am not worried,” coach Max Allegri insisted after a defeat to Roma on Sunday that threatened to turn into disaster, but many fans are. None of Juve’s title rivals have scored fewer goals, and only Napoli have conceded more. Poor runs often have the potential to render great certainties obsolete. And at Juventus, where winning is a big deal and losing bigger still, the response to results can often feel exaggerated.

Crisis certainly seems like a big word, particularly when the possibility of a historic treble was being discussed only three months ago. The club reached its first Champions League final since 2003 last term, but have seemingly forgotten it in two games.

“People first said we’d crush everything in our path and win everything and suddenly we’re treated like flops,” Allegri moaned, his moods fluctuating along with his side’s displays. “This team had quality a few weeks ago and the quality is still there. It requires patience and balance.”

This is a man who is embarking on his second campaign with the club and who, just like last season, has been made to feel the need to win over the club at every turn; someone who knows that both starts under him have been greeted with scepticism and who is all too aware of how fickle fans can be; someone who admits “after two defeats you have to reflect” but still says “I don’t like people who feel sorry for themselves” without drama.

Allegri is someone who, in both of his two seasons in charge in Turin, has had to instill new ways of playing. This term, it’s hard to shrug off the feeling that the previous methods have been eroded with the departures of Tevez, Pirlo and Vidal. The trio formed the cornerstones of the squad that won four straight Serie A titles, and it is arguable that Allegri has not been so undermined since AC Milan sold Zlatan Ibrahimovic and Thiago Silva from under his feet in 2012. Juve would have loved to retain all three of their stars, but that was not the reality of their situation.

On the other hand, persisting with players who had lost their motivation and drive would have been akin to hiding behind past glories, an action that runs counter to their policy of continued growth. Opting whether to retain or release them was a choice between two painful paths, but Juventus made the decision they believe allows them to continue with their project of combating staleness and rust in a squad that has won so much.

“There’s a bad atmosphere at Juve, as everyone says we are the favourites, but this year will be even more difficult,” Allegri had warned in July. “Before it contaminates us, we have to stop it right now.”

And if any false notions of superiority lingered within the club, they have been chased away by their poor start to the season. Judging by the current makeup of the side, there is the scent of freshness and hunger blowing about the place and, while that appetite hasn’t yet translated into performances or results, Allegri has noted that producing on the pitch will become easier once the current plague of injuries subsides.

Juventus’s search for a direct replacement for Pirlo has led them to the logical conclusion that there isn’t one: instead, Claudio Marchisio and Sami Khedira will rotate at the base of midfield.

Meanwhile, €32 million acquisition Paulo Dybala – still a huge amount on the peninsula – is a very different player to the departed Tevez, with the physically imposing Mario Mandzukic another newcomer added to an attack that also features last term’s breakout star Alvaro Morata.

Together, it is hoped that the three new additions can do what one man, Tevez, did alone up top last season. Even at this stage, their arrival has led to a shift in style, Allegri reasoning that it is better to evolve than employ an unconvincing copy of the past few campaigns. “This summer some players went, others arrived with different characteristics and we cannot think of simply replacing those who left,” the coach said. There is coordination and a defined strategy to support that idea at boardroom level; while there is fresh blood in the team, a notable core remains.

“A team that's different is not weaker,” former Juventus boss Marcello Lippi, who knows a thing or two about overhauling a side, said. “It means that the club had the courage and the foresight to plan ahead.”

The 13 best football kits of all time

The move to hand Paul Pogba the iconic No. 10 shirt vacated by Tevez is symbolic of the club’s faith in him. Even if the flamboyant midfielder has appeared to be playing within himself in a testing personal start to the season, he knows he matters to those who matter at Juventus. The club’s confidence in the Frenchman has seen him become the Old Lady’s main source of solace as criticism is directed their way.

“Juventus are a team with everything that it takes to win the title and go through the Champions League group phase,” assures Allegri, reminding everyone that “Serie A is a marathon, not the final of the 100 metres.”

Though a glance at the current standings makes such optimism appear misplaced, there will inevitably come a time when Juventus click. Always aware that the Bianconeri would begin the season building again, Allegri’s opinion has remained unchanged from the first day: “Take one step at a time, and reach May 16 at the top.”