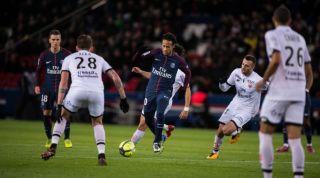 Neymar is rarely short on confidence, and the Brazilian star showed off his full ability in scoring PSG's sixth goal in their 8-0 demolition of Dijon.

From the byline, the 25-year-old squeezed past two defenders and jinked beyond another two before slotting home from just inside the box.

But despite his four-goal haul, not all PSG fans were pleased with the £200m forward by full-time.

The 25-year-old scored PSG's fourth from the penalty spot, but was booed by sections of the home support in denying Edinson Cavani the chance to take it. Had the Uruguayan talisman stepped up and converted, he would have become PSG's all-time leading scorer.

The ex-Barcelona forward also assisted two more goals and picked up the man-of-the-match award – which he later palmed off to a PSG staff member in a huff, according to reports. Oh dear.