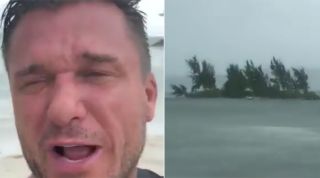 Tamplin was due to leave the Indian Ocean island with his wife, Bliss, on Wednesday – but the Mauritian authorities closed all ports and airports while the cyclone took its course.

The Essex native, who lured ex-Premier League stars including Paul Konchesky and Jermaine Pennant to the New Lodge, has previously made headlines with his rabble-rousing team talks and bizarre dressing room murals.

He tweeted on Wednesday: “Have been on lock down here on Mauritius waiting for the cyclone to hit. Have to go inside now. Wish us luck.

“Meant to fly home today but stuck in scale 3 cyclone on its way hitting us in Mauritius head on in next 12 hours.

“Not good times but the lord will keep us safe.”

According to The Express, the eye of Cyclone Berguitta narrowly missed the island on Thursday, passing the south-eastern tip.

The hurricane was dubbed category 1 as strong winds damaged property, felled trees and caused flooding on the popular holiday island.