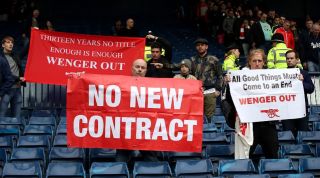 “It was pretty toxic – it’s probably the only time supporting the club that I’ve not enjoyed going to matches. In fact, I know a fair few people who just stopped going as soon as he was appointed,” says Chelsea season ticket holder, Richard McCormack, of Benitez's time at the club.

To describe his appointment as controversial is downplaying the fury that erupted as soon as the Spaniard put pen to paper in November 2012. It wasn’t just that the ex-Liverpool manager had previously said he would never manage the club, or that he once implied there was a lack of passion at Stamford Bridge that needed to be compensated for with flags placed on seats for Champions League nights.

No, it was more to do with the fact that Chelsea and Liverpool was the rivalry in English football during his time at Anfield, and that Benitez would always be associated with some of the most tempestuous fixtures English football has witnessed in modern times.

“He was booed when he walked out for his first match in charge and I don’t think the booing ever stopped,” says McCormack. The longer his reign continued, the louder the "Mourinho’s coming home" chants became in west London.

All of which makes Benitez's record as Chelsea manager even more remarkable: 23 wins from 42 matches, and a Europa League final victory over Benfica in Amsterdam which allowed him to walk away with his head held high at the end of the campaign. So what kind of reception will he get if he returns with Newcastle next season?

It was December 1976 when Mullery took the brave and, in retrospect, foolhardy decision to march onto the pitch and flick some V's at the Crystal Palace fans following his Brighton side’s controversial 1-0 defeat by the south Londoners in the FA Cup. It was the match that spawned a rivalry which still endures today, and landed the former Tottenham man in hot water.

To cap his virtuoso display, Mullery was drenched in scolding coffee as he attempted to walk down the tunnel. As a result, he emptied his pocket of change on the pitch and shouted: "That’s all you’re worth, Crystal Palace." Little wonder the Eagles contingent – packed into Stamford Bridge for the FA Cup second round (second) replay – were livid.

Unfortunate, then, that just under six years later Mullery found himself installed as manager at Selhurst Park. Not only was he the Eagles' sixth manager in a tumultuous 20-month period, he was also one of the most unpopular in the club's history. Some supporters immediately launched a boycott over his appointment, refusing to set foot inside the ground while the bespectacled V-flicker was in charge.

“By the time I got the job it was long forgotten from my point of view,” said Mullery. Palace fans, it seemed, had rather better memories.

If Arsenal fans have taken the softly-softly approach to their attempted ejection of Arsene Wenger, then Southampton supporters were at the opposite end of the spectrum. “WE HOPE YOU DIE SOON” was the headline emblazoned above Branfoot’s head on the front page of the Red Stripe fanzine back in 1993; most Saints fans rightly recoiled in horror at the undisguised hatred directed at their manager, but the vast majority still wanted him to do the decent thing and resign.

The style of football wasn’t to Dell regulars' tastes, and they never forgave the Geordie for getting rid of Jimmy Case, then doing the unthinkable and telling Matt Le Tissier that he best served the club on the bench rather than on the pitch. Micky Adams, who played under Branfoot, described the fanzine’s headline as ‘wicked’, while others called it 'sick' - both words used in their 1993 rather than 2017 incarnation.

“It was poisonous,” says Graham Hiley, the Southampton reporter at the Daily Echo during Branfoot’s reign. “Saints lost 2-1 at home to Everton on New Year’s Day 1992 and there was no way they could have won that day because the atmosphere was so bad. The tunnel was in the corner of the ground at The Dell and the atmosphere as he made the walk from there to the dugout was just evil.

"From my point of view it was quite hard because he was actually a really good bloke, with a good dry sense of humour. No one liked the style of play, though: they were brought up on a diet of fast, attacking football and this was the opposite."

Branfoot left in January 1994, leaving reporter Hiley with one enduring memory. “He’s probably the only manager to have been booed at Wembley,” he says. “He got Southampton to the Zenith Data Systems Cup final in 1992, but the fans didn’t care – he got a hammering that day too.”

Anyone who's seen the footage of a worse-for-wear Stuart McCall slipping off the top of a car following Bradford's promotion to the top flight in 1999 will be aware of the high esteem in which he’s held at Valley Parade. Dropping him from the team in 2001 was therefore akin to asking Alan Shearer to do a spot of bench-warming for Newcastle – and we all know what happened to Ruud Gullit when he went down that path.

At Bradford, though, Jefferies lasted significantly longer – much to the frustration of City supporters, who would rather have had anyone else (as long as it wasn’t Bryan Robson) in the dugout.

“Dropping McCall wasn’t the best of moves,” explains lifelong Bantam, Martin Hall. “Everyone had it in for Jefferies from day one anyway, but when he did that it was curtains for a lot of fans. Was there a boycott? It’s hard to tell because so many people stopped going and never came back.”

Bradford were regelated from the Premier League under Jefferies in 2001, but he was given the chance to take them back up again. That endeavour, needless to say, ended in disappointment, and he was eventually removed from his post over a year later than most Bradford followers would have wanted. Stan Collymore, who worked under a fair few managers in his time, memorably described the former Hearts boss as one of the most useless he'd ever come across.

On paper, the former West Ham and Southampton boss didn’t do a bad job at St James’ Park, but Newcastle fans never really took to the Londoner and let their printers and social media feeds do the talking.

This was a very modern fan coup, with a website set up to oust the man who'd been appointed by the equally vilified Mike Ashley in December 2010. The domain www.sackpardew.com featured 'Myths', 'Quotes' and 'Dark Days' sections - the latter detailed the club's apparent demise under Pardew's tutelage - while more than 20,000 flyers calling for his dismissal were distributed before a match against Hull.

Yet Pardew found a way to cling on, continually dodging the bullet - much to the frustration of those on the terraces. He eventually left on his own terms, heading south to Crystal Palace in January 2015. There, a tremendous start made him a popular figure at Selhurst Park, but most Palace fans had had enough 18 months later and few mourned his departure in December. Sound familiar, Magpies?

Your club’s worst player... EVER! As voted for by the fans

Introducing Justin Kluivert: the heir to Patrick who's desperate to follow in his dad's footsteps at Barcelona

He may have taken cross-city rivals Birmingham to League Cup glory and Scotland to the brink of the Word Cup, but for Villa fans, Alex McLeish was persona non grata from the moment he was announced as manager back in June 2011. Despite making one of the Premier League’s most bizarre appointments, Birmingham fought tooth-and-nail to keep hold of a manager that barely anyone of a Villa persuasion wanted to take over at their club.

As soon as rumour circulated of his appointment, graffiti appeared on the gates of Villa's training ground proclaiming ‘Bluenose Scum Not Welcome’. It should have been a warning to chairman Randy Lerner, but he pressed ahead regardless. As many as 600 fans gathered on the steps outside the Holte End to shout obscenities at the Scot on his arrival, and their contempt for McLeish grew as results continued to underwhelm.

A banner hoisted high at Villa Park shortly before his departure said it all: ‘We’re not fickle – we just hate you’. By the time McLeish left in May 2012, both he and Villa were left wondering whether it was worth all the effort.