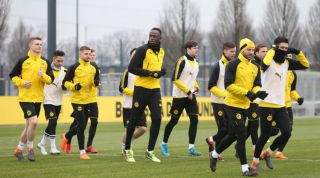 We're still not sure how serious either the sprinter or the club are in pursuing, but the good news is that we can now watch and find out. The Bundesliga YouTube channel is livestreaming Usain Bolt's first training session with Borussia Dortmund.

It's the English branch of their YT channel, so viewers can tune in and hear the commentary team doing their absolute best to up-sell the former sprinter. "Well, he is quite tall..." seems the gist so far.

To be fair, Bolt is clearly decent with a football at his feet - this isn't like former wide receiver Chad Johnson trying to earn a contract with an MLS team while the NFL was shut down by a players' strike - but the chances of him actually making an impression with Dortmund seem quite limited.