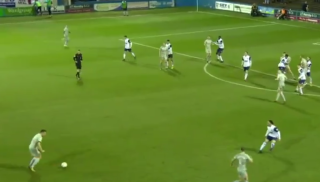 Eagle-eyed Sky One viewers may recognise the face: this is Carl Magnay, who won the second series of Football Icon (think Pop Idol with training cones and footballs) and last night he did this in the Vanarama Conference.

The prize for winning Football Icon was actually a contract at Chelsea. Inevitably, neither Magnay nor Sam Hurrell, who won the first series, ever made much of an impression at Stamford Bridge - or even in the professional game itself - but at least Magnay will always have this.

He's done just fine for himself away from Stamford Bridge, though: after unsuccessful loan spells with MK Dons and Northampton in 2009, Magnay spent three full seasons in the Conference with Gateshead and Grimsby – earning him a move to then-League Two Hartlepool in 2015.

His goal above was the winning one for cash-strapped Hartlepool in a 2-1 triumph, moving them above Barrow in the table and up into 18th place.