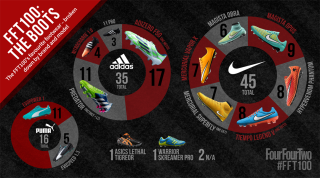 Analysing the favoured footwear of the FourFourTwo 100 Best Football Players in the World 2014 reveals that the majority favour either Nike or Adidas, with the swoosh wooing 45 players to the three stripes' 35.

The German firm can take comfort in the fact that they have the single most popular model for FFT100 players – the Adizero F50 adorns the feet of 17 players in the list, including Lionel Messi (who's so good he gets his own special type made for him).

Puma are in third place on 16 players, although their most popular model Evopower has 11 fans in the FFT100, a total topped only by the Adizero.