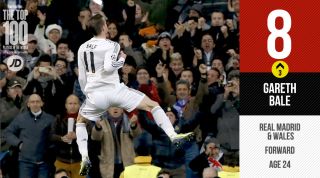 It’s the moment in Single White Female when Jennifer Jason Leigh’s character walks in with the same haircut as her housemate, played by Bridget Fonda, that alarm bells start ringing. The moment when it becomes obvious that well-meaning admiration has turned into an unnatural and frankly petrifying hero worship.

For Gareth Bale, that moment came against Galatasaray in the Champions League. With Cristiano Ronaldo watching on from the stands, the former Spurs forward stood over a free-kick 30 yards out and proceeded to mutha-hump it into the net, swerving, dipping and loop-the-looping past Eray Iscan.

The transformation was complete. The shy kid from Cardiff, already the (very) proud owner of Ronaldo’s well-coiffed hair, robotic physique and world record transfer fee, could now mimic C-Ron’s ability to wow the crowd and make keepers look like chumps on the grandest of stages. In any other walk of life, this sort of imitation would be scary (just imagine the new guy or gal in the office doing something similar to you).

In this context, the only ones with anything to fear are opposition defences. They not only have to contend with Ronaldo now, but a player who can do more than a passable impersonation of him. A player who, when you think about it in those terms, should be able to justify that hefty price tag.

After that victory over Galatasaray, Marca described Bale as "the leader of the team", highlighting how all of Real Madrid’s best attacking moves came through the Welshman. This is particularly admirable for a number of reasons. First, and most obvious, he wasn’t fit at the start of season, having missed pretty much all of pre-season with Spurs. When you consider that Bale’s game revolves around his unrivalled athleticism, this was bound to slow his start. Secondly, he had just moved to a new team, country and league. There is always a period of acclimatisation that accompanies this level of change.

Thirdly, and perhaps most significantly, Real Madrid are a pretty big deal. The burden of expectation that accompanies that famous Los Blancos shirt weighs heavily. When Zinedine Zidane spoke to FFT last year, he talked at length about the pressure he felt following his move to the Bernabeu, a crushing expectancy that left him contemplating early retirement. And Zidane knows a thing or two about coping with big-pressure games. So a leader of the team at this stage - that’s got to be worth something.

Taking that into consideration, Bale’s run of form since those injury-disrupted games has been impressive. In his last 13 games he has scored nine goals and laid on five more for team-mates. On Saturday he notched a perfect hat-trick against Real Valladolid, becoming only the second Brit to achieve the feat in La Liga behind Gary Lineker.

His fledgling attacking partnership with Cristiano Ronaldo and Karim Benzema is flourishing. While Ronaldo will no doubt benefit from having someone else to carry the ball up the pitch at break-neck speed, it’s possibly the Frenchman who will benefit most from Bale’s precision from the wings.

Almost as good a measure of Bale’s value is not to look at what he’s brought to Madrid, but what he’s taken from Spurs. In Bale’s absence his former club are a shadow of the side they were. Not only are they desperately missing his goals and assists, but the intangible galvanising effect of having the best player on the pitch.

Over the last few seasons, Spurs' best performances leaned heavily on Bale’s ability to shift momentum in their favour, often with 60-70 yard runs. How do you place a value on that? It’s certainly not a quality they’ve been able to replace with an almost equal outlay on Roberto Soldado, Erik Lamela and Christian Eriksen. Ask Spurs fans whether they would swap those three players for Bale; the answer would no doubt be unanimous. It's probably the same answer you’d get from Andre Villas-Boas.

Which is why the summer talk of Bale moving for an inflated fee made no sense. Not in the real world. Value, as we all know, is relative. And in a market where Edinson Cavani moves for £55m, is Bale’s value really that inflated? Probably not. As for those claiming he’s under pressure to outscore Ronaldo now he’s the world’s most expensive player, just consider how much Real Madrid would get for the CR7 were he to move in January. It'd be lot more than £86m, we imagine.

This isn’t to diminish Bale’s value, but to point out that in the grand scheme of football’s hugely overblown player transfer market, the price paid by Real Madrid for Bale is about right. If he continues working on that Ronaldo impression into the second half of the season – the winner in a crucial Champions League match, perhaps – he may prove to be the summer’s biggest bargain.

STYLE Make like Bale with the Adidas F50 range from JD