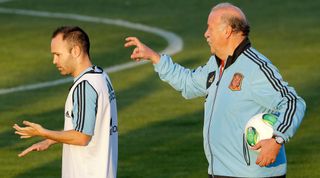 With Spain needing just a point from their final group game at home to Georgia on Tuesday night, fans of La Roja should be a fairly happy bunch.

The threat of France has been shrugged off, their pool of talent is ridiculously enviable and even the Barca-Real Madrid contingent seem to be getting along better without José Mourinho's Clásico naughtiness stinking up the place.

Despite all of this, the current mood is a little glum for a nation that should be squatting on a giant stool of smugness. Spain are, after all, European and world champions and don't have to field players who hoof shots 50 yards over the bar every 10 minutes (here's looking at you, England).

Once Tuesday's final qualifying game against Georgia is out of the way, Vicente del Bosque needs to work out how to turn possession into more goals, with just 12 scored in seven group games so far. “We are trying every way possible, but it’s tough,” admitted Xavi after Friday’s 2-1 over Belarus; a rather drab, ponderous performance from the reigning world conquerers.

There are also doubts over the fitness and durability over some of Spain’s key performers, not to mention the skipper who is barely able to get a game for his club.

Del Bosque's first big call lies between the sticks. Though his previous loyalties have laid with Iker Casillas, he chose Víctor Valdés against Belarus on the grounds that the Barça man is playing regular football. It's a stance that may hold firm if Casillas is restricted only to Copa del Rey and Champions League games, as it currently the case.

The return of Carles Puyol at Barça is always a case of ‘mañana, mañana, mañana’ (tomorrow), but should the bionic centre-back become the inspirational footballer of old and not the collapsing one, the temptation to pick him alongside Gerard Pique will be strong. It's especially the case considering Alvaro Arbeloa's nightmare form, with shifting Sergio Ramos to right-back a considerable upgrade.

Midfield war dogs Xabi Alonso and Xavi are showing signs of wear and tear, but both may benefit from club managers who are prepared to let them rest their legs from time to time. Real Madrid have Luka Modric as a fine deputy, while Tata Martino shows no fear in benching his big-time Betties in order to keep Barça’s starting line-up as fresh as possible.

However, there are real headaches up front, where Spain are struggling for those all-important goals. Their policy of keeping the ball, getting a lead and hanging on to it for dear life over the past two tournaments is becoming increasingly risky.

Andrés Iniesta can expect to be on the left of the forward line, should he not be drafted into midfield due to injuries. Pedro has a strong claim on the opposite flank having scored a third of Spain’s goals in their current World Cup qualifying campaign.

The No.9 (or false nine, this is Spain after all) spot is a humdinger, though: Del Bosque has a tremendous number of candidates, all of whom boast different strengths. The recent emergence of Diego Costa as a prime pick is another option to keep Del Bosque pondering from now until May.

Of course, the narrative normally goes that these decisions are ones any national manager would be tickled pink to have. Things can't be that bad if Juan Mata, David Silva, Alvaro Negredo, Javi Martínez and Cesc Fabregas are sitting on the bench in a tough World Cup clash.

What may be ailing Del Bosque, however, is an overload of choice and too many top-class footballers with a fair shout of playing a part of Spain’s starting line-up in Brazil. It's akin to an all-you-can eat buffet with 1098 different varieties of particularly tasty foods.

At some point soon, though, the national coach is going to have to start eliminating some choices in selecting a core group of players charged with retaining the World Cup. And that ain't going to be easy.