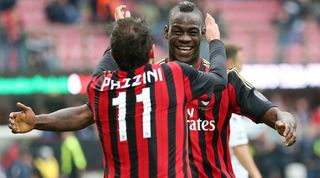 The final league table in Serie A is starting to take shape. Juventus are closing in on a third consecutive scudetto and, after overcoming Bologna, the defending champions moved to the magic 90-point mark, one off the club record set by Fabio Capello’s side in 2006. Inter’s 97-point haul is well within their sights.

However, Roma refuse to throw in the towel just yet and with 12 points still up for grabs the Giallorossi are eight points off the pace. The Romans’ 1-0 victory at Fiorentina on Saturday ensured that Rudi Garcia’s side have nailed down second place and an appearance in the group stages of next season's Champions League. So many records are tumbling for the top two that it has become a personal contest to see which side can knock down the most, with now Juve winning 17 home games on the trot and Roma setting a new club record of 11 away wins over the campaign.

Below the runaways, a win next weekend for Napoli will see Rafa Benitez celebrate his first season in charge with a third-place finish and a play-off tie for the Champions League. Potentially, Serie A has three strong contenders in the competition, and also the Europa League if those in the hunt can get their acts together.

There are plenty of permutations, but Fiorentina will be in Europe by virtue of their appearance in the Coppa Italia final where they meet Napoli. The Viola are currently in fourth place, so if the situation remains unchanged in that they do not implode and fall down to seventh then there are a further two places up for grabs for fifth and sixth.

Inter hold the advantage in fifth after their win at Parma took them to 56 points, while Milan moved equal with the latter on 51 points with a 3-0 victory over relegation-threatened Livorno. Parma hold the better head-to-head with the Rossoneri if it comes down to it. Lazio, Torino and Hellas Verona are all two points off the pace, and with fairly kind run-ins they certainly cannot be ruled out.

Italian sides must start making inroads in Europe again after Portugal moved ahead of Serie A into fourth place in the UEFA rankings. If Juventus eliminate Benfica in the semi-finals of the Europa League then Italy will reclaim fourth, but their days of four teams competing in the Champions League are now a distant memory.

The loss of that extra place in the premier competition is beginning to be felt more and more with each passing year. A case in point has been the fall from grace of the Milanese clubs, Inter and Milan, who have both had to endure watching their traditional rivals Juventus dominate the league while the centre and south of the country – namely Roma and Napoli – have also surpassed them and can now base their transfer strategy around the lure of Champions League football.

Neither side of the Milan divide will look forward to Thursday evening encounters in Europe’s second tier, with the knock-on effect of having to play more catch-up matches on a Sunday or Monday evening, but for now that is the height of their ambitions until some stability is brought to the running of the respective clubs.

Massimo Moratti relinquished control of Inter to Erik Thohir, who has so far not been the sugar daddy many expected and has only made fleeting visits to the San Siro. In the red half of Milan, meanwhile, it seems the coffers have run dry as the bank balance remains stuck in the red.

Preparing for an early start in the Europa League would complicate the lucrative summer friendly market, with both Milan and Inter scheduled to play a series of money-spinners in the US in July and August.  Finishing fifth would mean a late August play-off for the group stages, while sixth would mean two preliminary rounds to overcome, starting on the last day of July.

It remains to be seen if coaches Walter Mazzarri and Clarence Seedorf even survive the summer. Seedorf in particular must be wondering why he gave up the good life in Brazil to live in a constant haze of uncertainty at Milan. Having been lured back by Silvio Berlusconi despite Adriano Galliani preferring to promote Filippo Inzaghi from the youth team after Massimiliano Allegri’s sacking in January, it seems the enthusiasm of Seedorf's much-vaunted return has disappeared.

The power games behind the scenes would probably be at home in an episode of House of Cards, but despite winning five matches in a row for the first time since 2011 – and this with most of the senior players reportedly in open revolt – it seems the Dutch maestro’s tenure on the bench is set to be a short one.

If the die has not already been cast then the next two games should do it one way or another for both men anyway. Seedorf takes Milan to Roma on Friday, while Mazzarri faces his former club Napoli the following day. Then the pair face each other in a derby match, where defeat would see the bottom completely drop out of their respective seasons.

With Inter having the extra points cushion, the greater pressure is on Milan, and a slip-up could allow one of the chasing pack back into the mix. However, missing out on Europe altogether could have an even great detrimental effect on the Rossoneri. They only have to look across town to see that free Thursday evenings do not always make for an improvement on the domestic front.