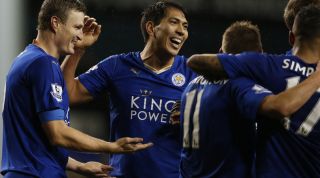 What does Claudio Ranieri think when people say Leicester can win the title? “I laugh,” the Italian grins. Maybe he’s the only one scoffing at the suggestion...

The Foxes have made a habit of living up to their nickname so far this season, not so much annoyingly digging through your bins but sniffing out the wins from tight games that have taken them to the top of the table. This was perhaps their most important yet, to re-join Arsenal at the top of the pile and open up an eight-point gap between themselves and fifth-placed West Ham.

They rode their luck at times at White Hart Lane – Kasper Schmeichel was a worthy man of the match, and you do wonder if they can hold out sucking up so much pressure against every big side before May – but by full-time you had to acknowledge another brilliantly gritty and organised display that provided the platform for Robert Huth’s 83rd-minute headed winner.

This was a workmanlike rather than skilled display from Claudio Ranieri’s side, who again proved deadly on the counter but on another day may well have paid a heavier price had Spurs tucked away any of their numerous chances. Instead, Leicester came away with a third consecutive league clean sheet and another positive result achieved without the decisive influence of Jamie Vardy or Riyad Mahrez.

“When you score without Mahrez and Vardy you say ‘Oh, good’,” admitted Ranieri post-match. “We drew the cup match with Wasilewski and Okazaki [scoring] and tonight with Huth, so that’s good. We created a lot of chances not only with Mahrez or Vardy but a lot of players. And that is important for the team.”

2. Kane could do with some help

It was a mixed night for Harry Kane, whose mature display ploughing a lone furrow up front helped produce four chances for his team-mates but little for himself.

Whenever the England man was slipped through on goal at least two Leicester defenders were there to marshal him wide, generally nullifying his threat to Schmeichel’s goal. On the one occasion Kane did manage to break the Foxes’ lines, he was denied by the Dane and could only watch his effort thud agonisingly off the bar.

Mauricio Pochettino didn’t change things up by bringing on Son Heung-min until eight minutes to go, immediately before Leicester got their late winner. As the rain tumbled and Kane tired, his side really could have done with another option up top who Pochettino felt he could rely on.

“Schmeichel was man of the match, and for that we are not worried,” declared an unmoved Pochettino after the game. “Sometimes it happens in football.

“All the stats are positive and it’s difficult to explain why we didn’t take the three points. We need to be calm and clever now because on Saturday we have another game.”

Tottenham have now conceded to corners twice in as many games against Leicester, a feat all the more frustrating for the north Londoners given the regularity of their own pummelling of balls into the Foxes’ box throughout this game. Toby Alderweireld was colossal in the air for Spurs, winning 12 of his 14 aerial duels and testing Schmeichel once with a first-half header.

Spurs did create chances – they popped off 21 efforts on goal no to avail – and their opening salvo will have done much to please Pochettino. Keeping it up is the key to making sure games like this aren't a more common occurrence. “The first 15 mins were unbelievable, they pressed a lot,” said an impressed Ranieri. “We wanted to press them too but it was impossible.”

None of Leicester’s achievements this season would be possible without their lung-busting central midfield duo of N’Golo Kante and Danny Drinkwater. While Mahrez and Vardy have rightly taken the majority of plaudits, it’s the work of the outstanding pair behind them that helps keep Ranieri’s men firing for 90 minutes.

Marathon-running Duracel pin-up Kante has to be a serious contender for Didier Deschamps’ France squad this summer despite being uncapped so far, while former Manchester United trainee Drinkwater has led by example throughout the campaign to produce quiet whispers of an England call-up.

At White Hart Lane the duo were terrific once again: between them they made 11 tackles, five interceptions and seven clearances, with Drinkwater particularly impressive when the going got tough in a thoroughly mature performance from the 25-year-old.

5. Schmeichel can be considered among league’s best

‘Young Kasper Schmeichel’ is actually now 29 years old, having forever lived in his dad’s shadow – but this might just be the campaign in which people stop referring to Schmeichel Snr whenever he makes his latest save.

The Dane has been among Leicester’s most consistent performers for over a year now and officially grabbed his nation’s No.1 shirt for good, having barely put a foot (or hand) wrong and notably improved command of his area. That wasn’t always the case – and for that he deserves great credit.

Perhaps it’s not just Vardy and Mahrez Leicester need to worry about offers for in the summer.

Analyse Tottenham vs Leicester yourself with Stats Zone