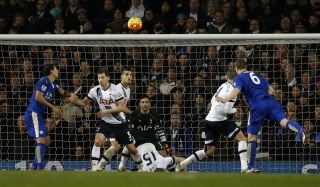 If Tottenham don’t win the Premier League title this season – and their chances aren’t looking good right now – then it probably won’t be because of two dropped points against West Brom. In fact, it will be much more to do with two matches that were largely overlooked at the time.

Leicester, of course, failed to win at home to the perennially awkward Baggies too, drawing 2-2 at the King Power Stadium in early March. Spurs didn’t lose ground there. More pivotal were the events of August 22 and January 13 – ones that didn't get that much attention at the time. On August 22, the story of the day was Bournemouth winning 4-3 at West Ham. On January 13, it was Liverpool’s 3-3 draw with Arsenal. But elsewhere the title was probably being decided.

On August 22, a Tottenham side sitting 13th in the early Premier League table travelled to Leicester, who'd won their opening two games but weren't expected to stay near the top for long. Dele Alli didn’t have a single Premier League start to his name back then, but he came off the bench to score his first goal for Spurs.

Mauricio Pochettino’s men had three times as many shots on target as Leicester, and 66% possession. But they could only hang on to the lead for 90 seconds, before Riyad Mahrez equalised. Final score: 1-1. Of the six games on Match of the Day that Saturday, Leicester vs Spurs was fourth in the running order.

INTERVIEW Dele Alli: “I wouldn’t say I’ve made it yet. I want to win the Champions League”

Fast-forward to January 13, and the return fixture at White Hart Lane. Leicester were still second, by now Spurs were fourth. The title race was expected by many to be between leaders Arsenal and Manchester City, three points behind in third.

Arsenal’s match at Anfield was the game chosen for live screening that night. Neither of the games involving the Premier League’s likely top two teams were shown live this season. When was the last time that happened? Probably never.

That evening at White Hart Lane, three days after Leicester had drawn 2-2 at the same ground in the third round of the FA Cup, Spurs had 21 shots to the visitors’ 10. But Leicester incredibly blocked 11 of them and won 1-0, thanks to Robert Huth’s header from a corner.

Had Tottenham won at home to Leicester – as they might have expected to do – and not let their lead slip at the King Power Stadium, they would be two points clear at the top of the table right now. Instead they’re seven behind with only three games remaining. Barring the most unlikely of turnarounds, their race looks run.

Leicester have ground more games out

Pochettino made the right noises about not giving up in his press conference after last night’s draw with West Brom, but amongst them there was a sense that even he understood Spurs’ title challenge was effectively over. He spoke of the need to take heart from a fine season, acknowledging the fact that even second for his youthful side would be a huge achievement.

“We are very young and we need to use this experience for the next few seasons,” he said. “You need to kill the game if you want to win the title, but there’s nothing to complain about. We feel very proud of the season.”

It was said with typical grace on a night when other managers might have been rather prickly, but it was the sort of speech delivered when you know the game is up, at least in terms of the ultimate aim. Even if the title is out of reach, Spurs will still have Champions League football to look forward to next season.

Only three weeks ago, Leicester boss Claudio Ranieri was telling the world that "other teams can win 4-0, we have to fight to win 1-0". It looked true then, and even more so after Tottenham’s impressive 4-0 triumph at Stoke piled the pressure on the Foxes.

This time, the roles were reversed. Leicester beat Swansea 4-0 - their biggest win of the season - while Spurs were left battling it out in search of a narrow victory. They couldn’t do it, largely as a result of missed chances. Pochettino’s side had 19 shots against West Brom but only two were on target. They were denied by the woodwork three times, most crucially when Erik Lamela should have scored early in the second half.

Tottenham have ground out a win by a solitary goal six times this season, Leicester have done it 14 times. Pochettino was asked afterwards whether that disparity was the reason why the Foxes look set to beat his side to the title.

“We have very different styles,” he said. “If you want to compare Leicester with us, we are completely different. They feel very happy to play on the counter-attack, we play in possession of the ball in the opposite half. Leicester fully deserve the position they are in, but it’s impossible to compare both teams.”

Indeed, Leicester’s four goals against Swansea came from only 289 completed passes. Spurs had almost matched that total by half-time against West Brom, taking their tally to 458 by the end of the game – the end of a match Tottenham could see slipping away from them.

West Brom were the ones agitated at half-time – specific details of his gripe were unclear, but Craig Gardner left the nearby press box in no doubt about his frustration when he was heard telling official Mike Jones "it’s a s*** decision, ref" as a conversation continued down the tunnel at the interval.

By the end it was Spurs assistant boss Jesus Perez who was becoming rather irritable, despite fourth official Roger East urging him to calm down. “No I won’t be calm, there are two minutes left!” Perez responded, the exasperation in his voice obvious. He knew Spurs’ title hopes could be gone in 120 agonising seconds.

West Brom boss Tony Pulis, standing throughout his press conference as he always curiously does, had another theory for Tottenham’s inability to catch Leicester. The Europa League.

“Tottenham have played a lot of games on Thursday nights and I’ve experienced that,” said Pulis, who managed Stoke in the Europa League four seasons ago. “Thursdays and Sundays are difficult.”

The Week In Tottenham: The Death of a Title (by nine defenders)

Dele Alli: “I wouldn’t say I’ve made it yet. I want to win the Champions League”

Riyad Mahrez: The street-schooled dreamer whose ambition knew no limits

Tottenham’s record after Europa League matches wasn't actually all that bad – they won five, drew three and lost one. But that defeat was at home to Newcastle, and who knows whether the extra fixtures sapped some of their stamina, at a time when Leicester didn’t have any such distractions?

Spurs still look set to finish above Arsenal for the first time in 21 years, although even the two north London derby matches will bring a sense of regret for Tottenham fans. Both ended in draws, both could easily have been victories. Spurs were the better side each time.

But ultimately, it looks like coming down to those two games against Leicester. The games that very few people paid attention to at the time, but the ones that may just have handed the Foxes the title.