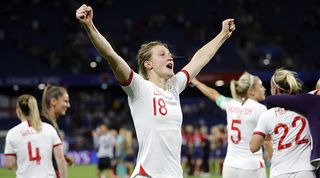 England Women lock horns with two-time world champions Germany in November, and we’ve got three pairs of tickets to give away for it.

Phil Neville’s side are currently enjoying the support of the nation as they compete for the biggest prize in France, and face the USA in Tuesday night’s semi-finals.

Once the dust has settled on the 2019 Women’s World Cup, the Lionesses have plenty more mouth-watering matches on the horizon – and they don’t come much bigger than a date with the No.2-ranked team on the planet.

Germany visit the home of English football on Saturday, November 9 (ko 5.30pm); one of several high-profile fixtures the Lionesses will face in preparation for Euro 2021, which England are hosting across nine venues.

To be in with a chance of winning, simply head over to @FourFourTwo’s Twitter page and tell us the Lioness you’ve been most impressed with this season.

WIN! A pair of tickets for the @Lionesses vs Germany at Wembley on November 9

We've got three to give away.

Just tell us which England star you've been most impressed with at #WWC2019 and why...

The fixture will be the Lionesses’ first match at Wembley since they lost 3-0 to Germany in November 2014, in front of a 45,619 crowd – a record attendance for an England Women’s international in this country.

Advance tickets for England Women vs Germany at Wembley on Saturday, November 9 (5.30pm) are now on sale, priced only £1 under-16s and £10 adults, at www.TheFA.com/Tickets