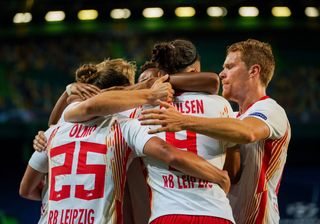 On this day in 2009, RB Leipzig were preparing themselves for a trip to Borea Dresden in the Oberliga Süd, Germany’s fourth division. This evening, a mere 11 years after their formation, they’ll face Neymar, Kylian Mbappe, and a billion dollar supporting cast in a Champions League semi-final.

In sporting terms, it’s arguably the greatest success story in the history of football. RB Leipzig the winning machine, bankrolled by billionaire owners and painstakingly coordinated by the very best executives, sporting directors, scouts and managers money can buy.

In Julian Nagelsmann, Die Roten Bullen boast perhaps the most innovative and exciting young coach in Europe. Don’t be fooled by the schoolboy scruffiness and aw-shucks grin, the 33-year-old has drilled this team into a ruthless, tactically flexible and hardworking unit - just ask Tottenham and Atletico Madrid.

“His football brain is so developed that I feel that I’m learning with and from him every day,” RB Leipzig assistant coach Moritz Volz, the former Arsenal and Fulham right-back, told the Guardian this week. “It’s exciting to be around somebody so inspirational in the way he approaches certain situations.”

Not even the premature loss of Timo Werner, a striker who struck 95 goals in 159 club appearances, has hindered Leipzig’s progress in this competition. They’ve simply evolved, rejigged and gone again, with a squad whose average age is 24.

“We don’t bring in players older than 23 or 24,” former coach and Sporting Director Ralf Rangnick, the man chiefly responsible for RB Leipzig’s successful sporting blueprint, told FFT back in 2017. “If you weigh up experience against youth - being able to sprint, being willing to invest energy - I think we are proving that experience is overrated.”

Young players, experimental coaches, state of the art facilities and, in almost no time at all, international success and recognition. It’s both enviable and admirable. Except, of course, when you look beyond the football.

RB Leipzig are the most detested team in German history, bar none. So much so, that fans of other clubs regularly boycott RB Leipzig matches. Those that do attend generally use the 90 minutes to demonstrate their displeasure and disrupt play in various ways.

Clubs themselves protest against Leipzig in what little ways they can. One Bundesliga rival, in December last year, refused to include the “RB” element of Leipzig’s name on their scoreboard, so that, hanging high above the stands, it simply read “Fortuna Dusseldorf vs Leipzig”. In the bureaucratic world of German football, that’s a serious burn.

It’s well known by now that RB Leipzig – or Rasenballsport Leipzig to use their official name – are merely a marketing vehicle for Red Bull. They’re not taking part for the love of football, the fans, beers on the terraces, or even the Bundesliga title or the Champions League. They want the marketing exposure that comes with on-field achievement. They want to sell cans of energy drink.

That would be merely tut-worthy had they not sidestepped Germany’s sacrosanct 50+1 rule to speed up the winning process. The rule ensures members of German football clubs have the final say on anything from shirt sponsors to ticket prices, and is the reason German football remains so accessible to working-class fans. Borussia Dortmund have 145,000 passionate, vocal members; RB Leipzig have 750, many of whom work for Red Bull and toe the company line.

The fanbase has no say and the club lacks any form of culture. The board have ruled out the anti-racism, anti-facism, anti-homophobia demonstrations traditionally seen at other German stadiums: “too political”. Even the club’s name was changed from SSV Markranstädt to RB Leipzig (RedBull wasn’t allowed) after the 2009 takeover, along with the crest and colours. Nothing here is sacred.

There are some who defend Leipzig for their promotion of young talent. This, too, is a myth, with no academy product ever featuring for the first team. Instead, young players are farmed around the various RedBull clubs – from Salzburg, with whom Leipzig have done business no fewer than 19 times, to New York and Bragantino in Brazil. In theory, this should be illegal, though RedBull have done enough to convince UEFA that these sister clubs are separate entities.

For all their on-field success, RB Leipzig will never be accepted by football fans in their own country; any achievements from here until the end of time will be discredited. Fathers taking their young children to their first games know, at some stage, they’ll have to explain why playing by the rules means their club can’t compete with a PR stunt. Nice guys finish last, kids. What a lesson for a new generation of fans.

Against tonight’s oily and oil-rich opponents, Leipzig might not seem so bad. RedBull may be a capitalist juggernaut, but no one alleges that they torture journalists or imprison LGBT people.

That’s not the point though. This shouldn’t be a lesser of two evils affair. You can want both PSG and RB Leipzig to lose. It’s like the opposite of Sophie’s Choice – take them both, officer.

If Nagelsmann does get the better of compatriot Thomas Tuchel this evening – if the RedBull winning machine does it again against the most expensively assembled squad in history – it will be a remarkable achievement in sporting terms. But it won’t be a victory for the little guy, an underdog story, or even a cause for celebration for those who love football in its purest sense.