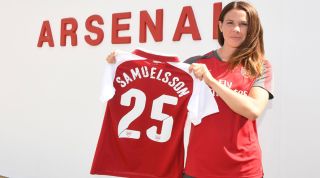 The Women’s Super League kicks off this weekend, with plenty of exciting additions from last season. Here's who you need to keep an eye out for in the coming campaign...

Joining a team that’s been gradually built up over four seasons, Bremer adds another dimension to this Manchester City side. Most people will be expecting her to replace Lucy Bronze (who left for European champions Lyon this summer) at right-back, but this versatile signing has made it clear she wants to play as a striker.

Having played out of position at Lyon, Bremer has a desire to get back up top, where she’s previously played for Potsdam and the U20 German national side. The 21-year-old will give the Blues a deeper option in attack by playing off the shoulder and making runs in behind to stretch teams, but she'll also be a goalscoring threat - and that could prove vital with the departure of Toni Duggan to Barcelona.

One of the top strikers in the women’s game at just 21 years old, Miedema joins Arsenal from Bayern Munich after scoring 14 goals in 22 games as part of a title-winning side in the Frauen-Bundesliga.

Before that, the prolific forward scored a whopping 39 goals in the Dutch league. The talented prospect plays an attacking, dynamic style of football, and will fit in well with manager Pedro Losa’s plans. After winning the Euros with Holland in the summer, she'll be relishing the chance to link up with international team-mate Danielle van de Donk at club level.

Chelsea Ladies' new recruit is an excellent out-and-out defender who prefers to play as the left-sided centre-half in a back four. Yet the Sweden international can also play left wing-back, where she has featured for her country.

Eriksson’s main attribute is winning the ball with tough tackles and distributing it to her team-mates - at least one of whom she'll be familiar with. The 24-year-old is joining Sweden goalkeeper Hedvig Lindahl, which should help form solidity at the back.

Considered a particularly exciting prospect by manager Nick Cushing, Manchester City were determined to sign the ex-Bristol City forward after she rounded off a fine display with a goal when she faced treble-winners Man City in the Spring Series.

Emslie first joined Bristol City halfway through the 2016 season and scored 11 goals to help Willie Kirk’s side win promotion back into WSL1. The 23-year-old Scotland international plays with a direct approach and thrives on one-on-ones, where she usually comes out on top. Her fast footwork and pace will dazzle the crowd in addition to her crossing ability, finishing and high levels of creativity.

A Scotland international who has excelled in top-flight football in Germany. Another Arsenal signing from Bayern Munich, Evans’s crossing ability and skill in getting between the lines will be key for Arsenal this season.

The 25-year-old winger has 48 caps for Scotland, with 12 goals to her name - which includes vital strikes in the qualifiers which led to Scotland reaching Euro 2017.

The Danish defender will slot into the Manchester City backline with her technical ability and composure. She’s a central defender who’s comfortable with the ball at her feet, and fans will also see her passion burn through thanks to an aggressive edge.

Predominantly right-footed, Jans can play as a left-sided centre-back, which is where she’s starred for former club Brondby and the Danish national side. However, the 23-year-old can play anywhere along the back four with her versatility, and could be vital for 2017/18 after the loss of Lucy Bronze. She impressed massively when facing the Blues in the Champions League in 2016.

A highly rated defender in Europe, the 25-year-old is already very experienced in the Champions League. Samuelsson had previously won the title in Sweden with Linkopings and was part of the Swedish squad that won silver at the 2016 Olympics.

The left-back’s main asset is her defensive capability – and while modern full-backs are constantly looking to drive forward on the attack, Samuelsson’s priority is to defend first as Arsenal look to strengthen their backline.