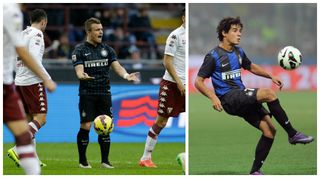 If seeing Xherdan Shaqiri in the stands at the Britannia on Sunday wasn’t unsettling enough for Inter fans, watching Philippe Coutinho score a screamer to win the game for Liverpool in Stoke offered a reminder of how their club has let talent go in the past only for it to flourish elsewhere. A little over six months ago, more than a 1,000 supporters gathered to welcome Shaqiri at Milan’s Malpensa airport. He was an anti-depressant in a bleak midwinter. A sign of a brighter future.

If Hernanes’s arrival from Lazio a year earlier for €15m hadn’t already underlined new owner Erik Thohir’s willingness to spend, this did. Shaqiri’s signing, however, was infinitely more exciting. His best years were still ahead of him. The perception was of a player with the sense of invention Interisti have always cherished. Players who see motorways where others only see footpaths like Luisito Suarez, Sandro Mazzola, Evaristo Beccalossi and Youri Djorkaeff, Roby Baggio, Alvaro Recoba and Wesley Sneijder.

No player, arguably, since Sneijder had generated so much excitement. This, everyone agreed, was the sort of player Inter should be signing. It was put down to the Mancini effect. Upon his return in November, he had spoken about Inter as if the years after the treble had never happened.

Why wouldn’t Inter be attractive to Shaqiri and other players of his profile? Aren’t Inter one of the most successful clubs in the world with 18 Scudetti, a trio of European Cups, UEFA Cups and Intercontinental trophies to their name? It was a lot more difficult, he said, to persuade players to join City. Top players choosing Inter, Mancini argued, should be entirely normal.

Except it hadn’t felt normal for a while. Inter were down in mid-table, hadn’t been in the Champions League in three years and in the meantime had finished sixth, ninth and fifth. It was believed they no longer had the same appeal so this was understandably presented as a genuine coup. Shaqiri had snubbed the Premier League. This made Inter fans, and those of Serie A in general, feel good about themselves.

Stoke’s interest had materialised then. Some laughed at Mark Hughes and his club for thinking they could get him. Delusions of grandeur. How dare they be so ambitious? A bigger offer than Inter’s had also been put on the table by Liverpool, but Karl-Heinz Rummenigge, the Bayern Munich chairman and former Inter player, wished to do his old club a favour. “This is the deal we have,” he said. “We could have earned more by selling him to England, but we’re giving him to Inter for a discount.”

That reduction in price would allow Inter to flip Shaqiri for a small profit in the summer. Not that anyone believed he would be gone so soon after the ink had dried on his four-and-a-half year contract. One of Inter’s founders, Hugo Rietmann, was Swiss. Shaqiri would meet his 91-year-old son, Aldo. Their first captain Hernst Xavier Marktl also heralded from across the Alps. In addition to his talent, trivialities like these only deepened an instant sense of belonging.

Oliver Bierhoff, a Scudetto winner with Milan, was of the opinion that Shaqiri had “everything to become a fan favourite” at San Siro and, eager to impress, he made an almost instant impact. On his first appearance at the Scala del Calcio, Shaqiri scored after a give-and-go with fellow January pick-up Lukas Podolski as Inter knocked Samp out of the Coppa Italia. “Give the elf the ball and see your boredom disappear,” recommended La Gazzetta dello Sport.

Fans were coming back to San Siro in their droves. After abandoning the ground towards the end of Walter Mazzarri’s time at the club - only 27,314 showed up for his final home game against Verona - Mancini and Shaqiri were drawing them back.

Following the display against Sampdoria, more than 40,000 tickets were bought for Inter’s next outing under the Madonnina. They were in for a let-down. Torino beat Inter at San Siro for the first time in 25 years.

But Shaqiri was arguably Inter’s player of the month in February, scoring in every competition he played in and delivering a virtuoso display at Parkhead against Celtic in the Europa League.

“He really reminds me of Sneijder,” Javier Zanetti said, “for his ability to spark a game into life, break a game open, and have the right idea of what to do before everybody else.” Gazzetta made a lot of how he was more decisive than his predecessors, averaging a goal every 292 minutes which compared favourably to Seba Veron (1358), Deki Stankovic (641) and Sneijder (433). He was creating a chance every 26 minutes.

From then until the end of the season, however, he wouldn’t hit the same heights. Shaqiri had joined Inter while on a winter break in the Bundesliga. He hadn’t trained for 25 days. A journalist asked if he might be overweight. “I’m all muscle,” he replied.  Did he have too much then? Shaqiri didn’t believe so. It was a fitness issue. “At Inter,” he admitted, “everyone was in full match rhythm. I wasn’t in the same condition as my team-mates. I suffered a calf injury and wasn’t 100% in shape.” He started and finished just seven of his 20 games for the Nerazzurri.

The last full 90-minute shift he put in was the humiliating 1-1 draw to bankrupt relegation fodder Parma back in April. He gave the ball away 23 times and got the worst rating (4.5) of all Inter players in Gazzetta. “Shaqiri didn’t convince me,” Mancini said. Replaced by Hernanes, he lost his place to him and would feature from kick-off only once more all season. Some have claimed that, in hindsight, that was the day when Shaqiri lost Mancini’s respect and no longer had a future at the club. If that were the case, it would be an over-reaction, not of course that you would put it past even this supposedly more zen Mancini.

Another knock on Shaqiri was that he appeared too one-dimensional. His football intelligence was questioned. “It’s completely different to the Bundesliga,” he explained.

“Here you work a lot more on the tactical side of things. It’s part of the game but I am not a big fan of these particular training sessions.” That perhaps won’t be as much of a problem in the less structured, more anarchic Premier League, but maybe it was to Mancini.

To give up on him so soon does seem strange, particularly considering how, in a point he was making to the press, Mancini said towards the end of the last season: “We’ve got a bad habit of being impatient in Italy.

Maybe it’s not just the press and the fans but the clubs too. Did Inter rush into his signing without much thought of where he might fit in long-term? Was the priority to show Mancini that they were able to deliver the profile of player he perhaps doubted they could attract? Cynics will ask whether they did it to get some good press and the fans back onside. Was it too good a deal to turn down given the terms Bayern were offering? A quick way of making a little bit of money?

Mancini was never going to build his team around Shaqiri as long as Capocannoniere Mauro Icardi stayed. If a “heavy-hearted” and high profile sacrifice needed to be made in order to finance the signings of Geoffrey Kondogbia & Co., and one of Shaqiri or Mateo Kovacic had to go, the impression was that fans would be more up in arms if the Croat were sold. So a measure of sympathy must be felt for the Swiss.

The situation when he joined Inter was complicated. Mancini had inherited a team built for different coaches with a different style and system in mind. When he wasn’t tinkering with the formation and players’ positions under the pressure to get results, he was shuffling his pack. There was a different starting XI every week. One minute Shaqiri was in and played wide right, No.10 and second striker. The next he was out. In the meantime he was adapting to a new league, new country and culture. To say he flopped is wrong. Shaqiri just needed more time and instead became a pawn in a chop and change transfer strategy that was bigger than him. One imagines he’ll be a success at Stoke. The scrutiny will be less and the team will play for him. After welcoming Shaqiri like a hero, Inter fans now bid him farewell with a sense of irony and resignation. As was the case with Coutinho, they know their club might come to regret it.