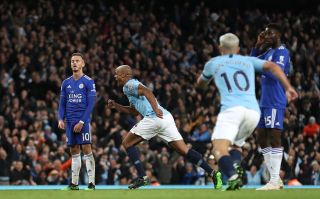 Manchester City edged out Liverpool to secure a successful defence of their Premier League crown as a thrilling title race went down to the final match of the 2018/2019 season.

Here, Press Association Sport takes a look back at five key matches over the course of the campaign.

The two Premier League title contenders went head to head at Anfield in October ‚Äì and City wasted a golden opportunity to leave with all three points.

With just five minutes left, Virgil Van Dijk brought down City substitute Leroy Sane to give away a penalty.

Riyad Mahrez stepped up, but the ¬£60million summer signing could only blaze his spot-kick over the crossbar.

The point allowed City to regain top spot from Chelsea, as the Reds dropped to third.

Liverpool edged out Tottenham 2-1 on March 31 to return to the top of the table ‚Äì but only after late drama when Toby Alderweireld diverted the ball into his own net in the final minute.

It appeared Jurgen Klopp‚Äôs side were about to hand the initiative back to City after Lucas Moura cancelled out Roberto Firmino‚Äôs first-half header, which would have left the Reds level on points but significantly behind on goal difference.

However, as the clock ran into the 90th minute Mohamed Salah popped up at the far post to head goalwards, which Hugo Lloris could only palm out and Alderweireld managed to deflect the ball past his goalkeeper.

A trip to bitter rivals Manchester United late in the season was seen as a possible hurdle for City in their head-to-head duel with Liverpool.

They need not have worried.

Bernardo Silva put them ahead nine minutes after the break and Leroy Sane made it safe as David De Gea had a night to forget.

City had needed the intervention of goal-line technology to award Sergio Aguero‚Äôs effort in a 1-0 win at Burnley.

There was, though, nothing marginal about the superb strike from captain Vincent Kompany which saw Pep Guardiola‚Äôs side secure a crucial win over Leicester to put the destiny of the title back in their own hands.

With just 20 minutes left of what had been a largely nervous display at the Ethiad Stadium, City‚Äôs long-serving and influential skipper crashed in a ferocious long-range effort which flew past Kasper Schmeichel and into the top corner.

It was a 13th successive Premier League victory for City as they edged back in front of Liverpool heading into the final day of the season.

With City just a point ahead, there was little margin for error from Guardiola‚Äôs men when they travelled to Brighton.

The Reds ‚Äì boosted by their thrilling midweek 4-0 victory over Barcelona to reach the Champions League final ‚Äì had to beat Wolves at Anfield to stand any hope of snatching the title away.

It looked as if it was going Liverpool‚Äôs way when Sadio Mane scored and City went behind, but the Blues would hit back to win 4-1 on the south coast and defend their crown.