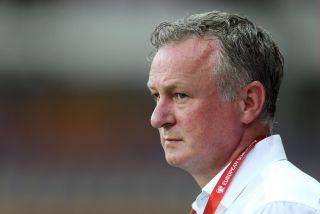 Here the PA news agency takes a look at five key talking points ahead of the game.

A Dutch squad featuring the likes of Matthijs De Ligt, Frenkie De Jong and Daley Blind needs little introduction but for Northern Ireland captain Steven Davis there will be reunions with his former Southampton manager Ronald Koeman and Saints team-mate Virgil Van Dijk. Koeman has been effusive in his praise of Davis in the build-up to the match, but will be hoping the 34-year-old proves no match for Holland’s star-studded midfield.

🎥 Four years ago we dared to dream and it became reality…💚— Northern Ireland (@NorthernIreland) October 8, 2019

After Holland’s victory in Germany last month, both Koeman and Michael O’Neill are treating this as match the first of a head-to-head contest between the two nations for a ticket to Euro 2020. The pressure of expectation weighs more heavily on Holland’s shoulders, something Northern Ireland must find a way to exploit. “Now we play both games against Northern Ireland for our ticket,” Koeman said. “It starts tomorrow and if we don’t get the result we want, it will be very painful.”

Jamal Lewis has been forced to withdraw from the @NorthernIreland squad for their upcoming @EURO2020 qualifiers with a knee injury ⬇️ #ncfc— Norwich City FC (@NorwichCityFC) October 7, 2019

O’Neill was braced for bad news regarding the availability of Norwich full-back Jamal Lewis after he suffered ligament damage in his elbow last week, but instead it was a knee injury suffered at the weekend which ultimately ruled him out of Thursday’s match. Whatever the cause, the news is a major blow for Northern Ireland given how important the left-back has become to O’Neill’s system since he made his debut last year. As the manager said himself last week, he might just be the hardest player in the side to replace.

Bailey Peacock-Farrell is expected to start Thursday’s game having made himself Michael O’Neill’s number one choice since the start of the Nations League last year. But with the 22-year-old struggling to even get on the bench this season following his move to Burnley, O’Neill has spoken of his concern about a lack of match action. That was the case for all three goalkeepers in the squad during the last international window but as the group reconvened this week, Michael McGovern arrived on the back of making his long-awaited Premier League debut for Norwich. A 5-1 home defeat to Aston Villa was not the ideal way to mark his first start, but he did save a penalty and O’Neill will surely keep a close eye on what happens over the coming weeks.

Former Holland and Rangers favourite Fernando Ricksen will be remembered with a minute’s applause alongside Dutch international Humphrey Mijnals prior to kick-off. Ricksen, popular with both sets of fans having won 12 Holland caps during a Rangers spell which yielded two league titles and two Scottish cups, died at the age of 43 last month following a battle with a motor neurone disease.