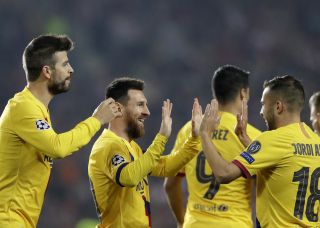 That moves the Argentina star one off Ryan Giggs’ all-time record, while he remains second in the competition’s all-time scoring list behind Cristiano Ronaldo.

Here, the PA news agency looks at five statistical accomplishments for Messi in the Champions League.

Where else to start than with the rivalry between the two greats of the modern era? Messi and Ronaldo have shared 10 Ballon d’Or awards equally between them and are the only two players with a century of Champions League goals.

Six of the best

Messi has been the competition’s leading scorer on six different occasions, including four in succession from 2008-09 to 2011-12 when he notched his career-best tally of 14.

He shared the prize with Ronaldo and Neymar in 2014-15 and led the way again with 12 strikes last season.

Ronaldo has seven Champions League Golden Boots including that shared prize, and accounts for the three highest-scoring individual seasons in the competition.

Messi has eight Champions League hat-tricks to his name, matching Ronaldo for the record with no other player on more than three.

That includes a four-goal haul against Arsenal in the 2009-10 quarter-finals and five against Bayer Leverkusen in the last 16 in 2011-12.

Barcelona have only been beaten in three Champions League games in which Messi has scored, with Celtic the unlikely candidates to first achieve the feat when they won 2-1 in the 2012-13 group stage.

Barca have won 58 and drawn eight games with Messi on the scoresheet.

Only long-time Manchester United winger Giggs, another of the great one-club men, has scored in more Champions League seasons than Messi.

The Barca star should have the chance next season to match the record and unlike Giggs, he has done it in consecutive years.

Giggs was consistent rather than prolific, only scoring 28 goals in total in the competition. Only twice did he get more than two in a single campaign, with five in 1998-99 and four in 2002-03 – Messi, as previously mentioned, has scored five and four in individual games.