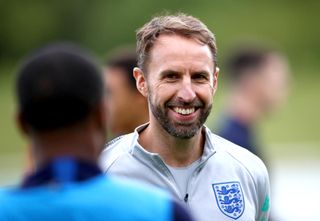 Gareth Southgate’s side thrashed Bulgaria 4-0 on Saturday to continue a fine run of form but Kosovo head to Hampshire with their tails up following their own impressive results.

Here, the PA news agency takes a look at the main talking points heading into the game.

England to march on at the home of the Saints?

The Three Lions have won their opening three Group A qualifiers with an aggregate score of 14-1. Continuing that run over Kosovo, the team currently occupying second spot, would give Southgate’s side control of the group ahead of an away double-header against the Czech Republic and Bulgaria next month. The last time England played at St Mary’s they were held to a 2-2 draw by a plucky Macedonia side in a Euro 2004 qualifier almost 17 years ago – Southgate was an unused substitute that night and will be hoping for a better outcome on his international return to the south coast.

Kosovo aiming for a sweet 16

Southgate will be making sure his players and staff do not underestimate Tuesday’s opposition. Kosovo, under eccentric head coach Bernard Challandes, are in the midst of a 15-game unbeaten run stretching back to October 2017. A run of nine defeats preceded the upturn in form and the visitors – yet to face England at senior level – will be hoping they can add a major scalp to their impressive results of late.

Five-star Sterling & Kane can do it again

Both Kane and Raheem Sterling have scored five goals in England’s opening three qualifiers – each also hitting a hat-trick along the way. Only three players have managed more in the qualification campaign so far, and their respective countries have already played five fixtures. The pair will be hoping to be named in Southgate’s starting XI on Tuesday before adding to their impressive tallies.

Southgate claimed after the win over Bulgaria that he has some of the best attacking players in the world. Kane and Sterling, along with Marcus Rashford, started on Saturday and would be seen by many to be the first-choice front-three moving forwards. But Borussia Dortmund winger Jadon Sancho may have something to say about that – the 19-year-old is highly-regarded by Southgate and could add to his seven caps by coming into the side to face Kosovo. If he does – and can get off the mark for his country in the process – he will be hard to displace for the time being.

Maddison & Mings waiting in the wings

While Chelsea’s Mason Mount made his England debut in Saturday’s win over Bulgaria, there are still yet to collect their first senior cap. Leicester midfielder James Maddison and Tyrone Mings of Aston Villa have taken different routes to reach the England squad but the pair will be hoping to make their respective bows this time out. Maddison has plenty of competition in the creative, attacking position while Mings will have to oust either Michael Keane or Harry Maguire if he is to break into the side.