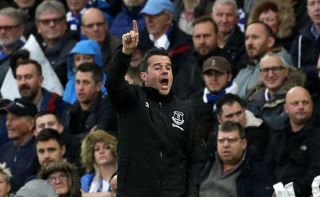 Jurgen Klopp watched Liverpool wriggle out of another hole at Anfield and maintain their six-point lead over title rivals Manchester City.

Leicester harbour Champions League aspirations after hitting nine at Southampton, but at the other end the nights are drawing in for Newcastle and Norwich.

Under-pinning all the Premier League action this weekend was yet more controversy involving VAR. Here, the PA news agency runs the rule over the goings-on.

Another week of VAR controversy was highlighted by a controversial penalty award at Brighton which earned the ire of Match of the Day presenter Gary Lineker. Everton appeared to be easing to a priceless away win when VAR decreed Michael Keane had fouled Aaron Connolly in the box – earning the Seagulls a spot-kick which turned the game in their favour. It was the first time VAR had been used to award a penalty, and other incidents over the weekend included contentious over-rules and atmosphere-sapping delays in goal awards. Referencing the intention of only using VAR for clear incidents, Lineker tweeted that technology had gone from “pole vault heights” to “limbo dancing levels”.

If Liverpool end their long wait for a Premier League title this season they will look back at Sunday’s come-from-behind win over Tottenham as one of the crucial moments. Coming soon after they squeezed past Leicester with a late penalty, Klopp’s men repeated the feat to show that once again – and arguably unlike recent seasons – they are ready to pass the test of nerve. There are bound to be slip-ups along the way. But something about this current Liverpool squad’s never-say-die spirit suggests their current six-point advantage over Manchester City could sustain.

But for a late Sokratis strike being ruled out by VAR, Arsenal could have been sitting just points behind Frank Lampard’s hyped Chelsea young guns and nine-shooters Leicester in the Premier League table. Instead, they languish five points adrift and are left to reflect on tossing away a two-goal lead against Crystal Palace in a match marred by the petulant reaction of captain Granit Xhaka upon being substituted. The boos facing Xhaka as he trudged off encapsulated the serious issues afflicting the Gunners are the moment, and the impatience of many fans with what they see to be Unai Emery’s questionable and inconsistent tactics.

Some seem almost defeatist in their assumption that the super spending power of the Premier League elite will once again prove the decisive factor in the chase for Champions League places. Not so Leicester, who under the astute guidance of Brendan Rodgers have harnessed a growing belief that they can repeat – at least to some extent – their stunning title-winning season of 2016. Friday night’s staggering 9-0 win at Southampton simply showcased the stunning emergence of players like James Maddison and Ben Chilwell as bona-fide Premier League stars. They currently sit in third place for a reason – the top two apart, the Foxes are the best of the bunch, no matter what the cheque-books would have you believe.

Ask Newcastle fans if money guarantees success. After urging Mike Ashley to dip into his considerable cash-flow, the Magpies appear to have been landed with two almighty flops. For their combined £61million price tag, Miguel Almiron and Joelinton have summoned a single goal so far this season and continued to look woefully inadequate in Sunday’s draw with Wolves. Home-grown brothers Sean and Matty Longstaff, in contrast, have given long-suffering north-east fans the biggest cause for optimism this season. If Steve Bruce is to win over his doubters and steer his side to Premier League safety, he will know which of those two pairs he is best relying on.