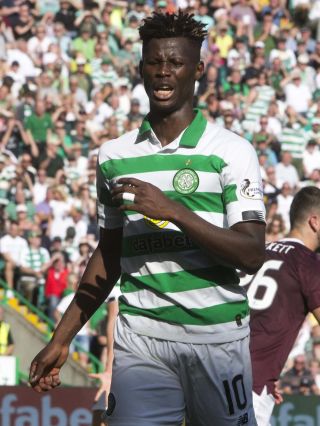 Celtic and Rangers will go into their first meeting of the season level on points after both recorded wins on Sunday.

Rangers briefly claimed Ladbrokes Premiership top spot after a 1-0 victory over St Mirren but the champions quickly jumped back to the summit.

A 3-1 win over Hearts at Celtic Park sent them top on goal difference ahead of their trip to Ibrox next Sunday.

1. Celtic have another striking option

Neil Lennon had to make do with Odsonne Edouard after arriving last season with Leigh Griffiths taking time out and January signing Vakoun Bayo out with hamstring trouble. With Griffiths back and firing, Bayo finally made his first start in Sunday’s 3-1 victory over Hearts and claimed a double – even though Hearts manager Craig Levein insisted they were both own goals. Regardless of who scored, Bayo showed he will be a threat from crosses and came close again when he headed against a post.

2. Kilmarnock’s new pitch is not any more popular

The much-maligned Rugby Park artificial surface was ripped up and relaid in the summer but Aberdeen manager Derek McInnes blamed the new park for a hamstring injury to Scott McKenna after the Scotland defender slipped. Former Killie midfielder Craig Bryson later claimed the pitch got more difficult as it dried up and the bounce was difficult to predict.

Twenty minutes in… penalty to Motherwell and a red card for handball for Jamie Hamilton#MFCLive— Motherwell FC (@MotherwellFC) August 24, 2019

Hamilton head coach Brian Rice labelled confusion over rule changes as “farcical” after both his team and Motherwell were awarded penalties for handball during the Steelmen’s 3-1 derby triumph. Rice said: “To me, we are mucking up football and taking the game away from the people.”

4. Ross County’s honeymoon period is over

🚀| Ok, ok – we’ve watched this too many times ourselves already. It’s only fair we share it with you all again!@jackstobbs7 – take a bow! pic.twitter.com/2lH15GLfyk— Livingston FC (@LiviFCOfficial) August 25, 2019

The Championship winners enjoyed an emphatic win over Hamilton and a well-deserved point at Hearts in their first two games, but they slumped to a 4-1 home defeat against Livingston. County got a stark lesson in what to expect in the top flight as Livi scored three times from balls into the box inside 26 minutes.

The Croatia full-back struggled for fitness and consistency after arriving  last August but the quality of his left foot was evident. And he delivered a major contribution by curling a brilliant free-kick to earn three points in Paisley.