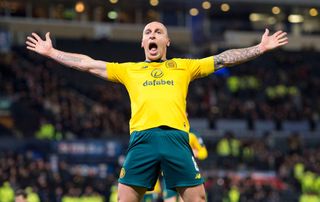 Celtic and Rangers will meet in the first Old Firm cup final since 2011 after both teams cruised through their Betfred Cup last-four clashes.

Here, the PA news agency takes a look at some of the major talking points from this weekend’s Scottish domestic action.

No-one needs reminding of the Rangers boss’ accomplishments as a player but here they are in any case – one Champions League winners’ medal, a UEFA Cup winners medal, two from the FA Cup and three in England’s League Cup, plus 114 caps for England. Now he is just 90 minutes away from claiming his first major honour as a manager after seeing his side crush Hearts 3-0 to book their place in the Betfred Cup final. However to do that he will have to break Celtic’s strangle-hold on Scotland’s domestic prizes come December 8.

Celtic have found another match-winner

Attacker Mohamed Elyounoussi scored a double in Celtic’s comprehensive 5-2 Betfred Cup semi-final win over Hibernian at Hampden Park on Saturday. The Norway international has now scored seven goals in 10 appearances since arriving on loan from Southampton and has been a top player for Neil Lennon. Whether there is any chance of a permanent move to Parkhead is debatable and probably doubtful, but his presence can help ensure another successful season for the treble-treble winners.

Hearts have no time to waste in search for new manager

Austin MacPhee was left to take command of the Jambos at Hampden after time was called on Craig Levein’s Gorgie reign earlier this week. But the Northern Ireland assistant coach could do nothing to turn around what has been a dismal campaign for the Tynecastle team as they were overrun by Rangers. MacPhee will meet with Ann Budge on Monday morning to decide whether he will still be in interim charge come Saturday’s visit of St Mirren but if the Hearts owner has any sense she will make an appointment as quickly as possible.

Hibernian’s city rivals Hearts pulled the trigger this week as they fired Levein but Easter Road boss Heckingbottom remains in the firing line for many of the Leith support. His side had a free hit in Saturday’s Betfred Cup semi-final with Celtic but slumped to a 5-2 defeat. Sitting only a point better off than the second-bottom Jambos, Hibs now have another huge clash with St Johnstone in Perth on Saturday but Heckingbottom – whose team have failed to win any of their last 13 games inside 90 minutes – might find himself staring down the barrel if he cannot turn his side’s woeful run of form around.

Race for third place hots up

With Celtic and Rangers appearing to be locked in a two-horse race for the Ladbrokes Premiership title, the rest of the top flight are scrapping it out to be named ‘best of the rest’. Motherwell currently lead the way after fighting off Livingston at Fir Park while Aberdeen sit just a point behind after beating 3-0 Kilmarnock, who could have leapfrogged the Dons had they triumphed at Pittodrie. With six months to go, there is certain to be more thrills and spills along the way.